You are here: Home / MidEastGulf / Yemen: 68 killed in fierce clashes between Yemeni army and Houthi rebels 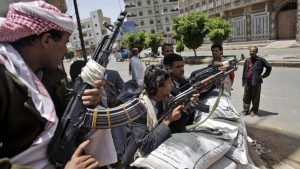 At least 68 fighters have been killed over the weekend due to fierce military confrontations near the strategic Bab El-Mandab strait, military officials said to middleeastmonitor.com.

The clashes were between local resistance forces backed by the Yemeni army and Houthi rebels in alliance with ousted Yemeni President Ali Abdullah Saleh.

According to the officials, at least 55 Houthi militia forces have been killed in fighting and 72 others wounded, military sources said. Thirteen local resistance fighters and members of the Yemeni military have also been killed, including army general Brigadier-General Abdul Aziz Al-Majidi according to AFP.

Resistance forces launched an assault on Saturday which led them to recapture the coastal Dhubab district, just 30 kilometres north of Bab El-Mandab.

Yemen has been locked in a bitter battle between Houthi rebels allied with forces loyal to ousted President Ali Abdullah Saleh and government forces led by President AbdRabbuh Mansur Hadi, along with local tribes and resistance forces backed by the Saudi-led coalition.