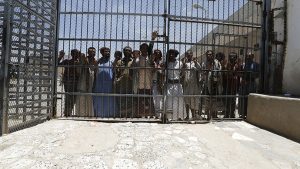 Eighteen inmates of the Yemen-based Al-Qaeda branch managed to escape from a prison controlled by the Shiite Houthi rebels in Al-Bayda province, an official has said, according to siasat.com.

According to the security source, who preferred to remain anonymous, the escape followed a rebellion that erupted on Saturday inside the Political Security (Intelligence) prison controlled by Houthis in Al-Bayda province, Xinhua news agency reported.

“The guards around the prison who were badly injured failed to resist or put down the prisoners rebellion,” the source said.

“Even the weapons of the guards were seized by the al-Qaida inmates who fled to unknown locations,” the source added.

The Al-Qaeda network mostly operating in eastern and southern provinces, has been responsible for many high-profile attacks against security forces in the country.

Scores of Al-Qaeda militants are engaged in the ongoing fighting against the Shiite Houthis in Al-Bayda province and other Yemeni provinces.