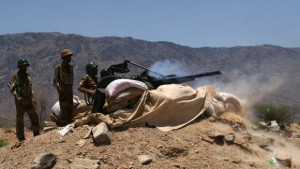 At least 15 fighters of the Ansarullah group were killed Wednesday in an ambush by militants loyal to fugitive president, Mansur Hadi, in Yemen’s southern province of al-Dhalea, an army officer told Xinhua.

“The militants ambushed armored vehicles carrying Shiite Houthi fighters and weapons near Damt town which they retook three days ago, killing about 15 at the scene,” the local army officer said on condition of anonymity.

“Since last week, the Ansarullah and popular committees continued to send heavy reinforcements and well-trained fighters in an apparent attempt to re-enter southern provinces such as al-Dhalea, Lahj and Aden, where hundreds of Sudanese and UAE aggressor forces are positioned,” the army source said.

On Tuesday, hundreds of forces loyal to fugitive president Mansur Hadi, were mobilized to the strategic military air base of Anad in Lahj province.

A tribal chief told Xinhua that Houthis approached toward military locations controlled by army units loyal to the government near Lahj province.

Earlier, Yemeni’s troops captured a Saudi warship after launching rocket strikes against it off the coastal city of Mokha.

Yemen has been witnessing ceaseless military attacks by Saudi Arabia since March 26. The military strikes are supposed to undermine the Ansarullah movement and bring Hadi back to power.

The Saudi aggression has reportedly claimed the lives of more than 7,100 people and injured nearly 14,000 others. The strikes have also taken a heavy toll on the impoverished country’s facilities and infrastructure, destroying many hospitals, schools, and factories.

Human rights groups and international organizations have voiced deep concern over the rising number of civilian casualties in Yemen, calling for an end to the conflict.