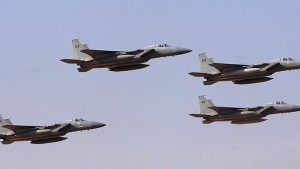 The Saudi-led coalition said Wednesday it killed 105 Houthi rebels in air strikes around Yemen’s strategic city of Marib, as the insurgents claimed to have almost encircled the city, like reported by thedefensepost.com.

That brings to nearly 2,000 the number of Houthis the coalition — backing the government — says it has killed around Marib in strikes it has reported almost daily since October 11.

The Iran-backed rebels rarely comment on losses, and AFP could not independently verify the toll.

“Thirteen military vehicles were destroyed and 105 insurgents were killed in strikes in the past 24 hours, the coalition said, according to the official Saudi Press Agency.

The latest bombing was carried out in Al-Jawba, about 50 kilometers (30 miles) south of Marib, and Al-Kassara, 30 kilometers to the northwest.

Marib, capital of the oil-rich province of the same name, is the internationally recognized government’s last bastion in northern Yemen.

The Houthis reportedly said they are tightening their grip around Marib city.

“Our forces have reached the vicinity of the city of Marib, which is nearly surrounded,” said Mohammed Nasser Al-Atefi, who serves as defense minister in the Houthis’ unrecognized government in Sanaa, west of Marib, according to the Al-Akhbar Lebanese daily on Wednesday.

He added that it is “only a matter of time” until they seize it.

In February, the Houthis began a major push to seize Marib, and have renewed their offensive since September after a lull.

Yemen’s civil war began in 2014 when the Houthis gained control of the capital Sanaa, 120 kilometers west of Marib, prompting Saudi-led forces to intervene to prop up the government the following year.

Tens of thousands of people have died and millions have been displaced, in what the United Nations calls the world’s worst humanitarian crisis.

The UN Security Council last week called for “de-escalation” in Yemen, in a unanimously adopted statement to counter “the growing risk of large-scale famine” in the country.