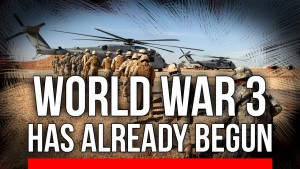 A professor in intelligence analysis in Lund Swedish mosque , Wilhelm Aggreyl believed that the terrorist attacks that took place in Paris and the French respond confirm the occurrence of World War III.

Aggreyl said in an interview with sveriges newspaper – south of Sweden, that World War III may be very different from World War I and II, and it will evolve gradually, so difficult to detect.

He stressed that the war between the Islamic terrorist organizations on one hand and European countries on the other hand describes well the occurrence of World War III.

And he believed that there is an effective factor playing on the revitalization of this conflict behind the killings in Paris , and through the reactions of France, the Islamic state organization – ISIS – will develop the use of weapons-out battle, France statement that it is a war with terrorism is what ISIS seeks and succeeded in it.

He said that four of the permanent five members in the Security Council in this war, makes it a world war, it is wrong to believe that World War III will be similar to first or second World War, but perhaps we are now in the midst of World War III process, but we do not know that.

The Professor in Swedish intelligence analysis explained that the war now and its results do not affect the Middle East and Africa only, but Europe and the countries as well, “Here we see a series of massive events in the European countries without being able to manage or control them.”

In the last question of the newspaper about his vision of what will be the outcome of this struggle? He replied, “I do not know how this conflict will end, and cannot propose expectations through the events of a few weeks, claiming to know how things will be in the Middle East and the European countries after years is not possible, but There is a great possibility for the expansion of the war to become more destructive than it is today”.