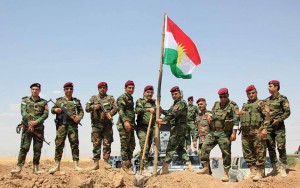 Britain’s Senior UK Defence Adviser for the Middle East has called the Kurdish Peshmerga forces the key factors in the fight against Islamic State militants.

During the meeting Barzani outlined the latest developments in the fight against Islamic State (IS) and the current security and political situation in the region and thanking the international coalition forces for the crucial role they play in the campaign against IS.

He told Beckett that the Peshmerga still requires more support to maintain its successful operations against the jihadist group.

Lt. Gen. Beckett acknowledged the sacrifices made by the Peshmerga in protecting the people and territory of the Kurdistan Region, and said that their significant victories have made the world proud.