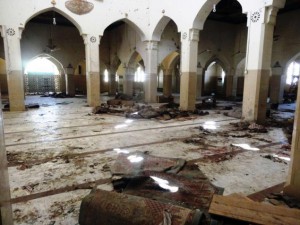 Two women suicide bombers killed 15 people, including themselves, early on Wednesday in northeast Nigeria at a mosque in the compound of a government workers’ housing estate and at another location there.

In a separate attack, the military said Boko Haram extremists attacked a rural military camp in northeast Yobe state overnight but were repulsed by troops who killed at least 100 insurgents. Army spokesman Col. Sani Usman said seven troops died in the fighting and nine were injured in the village of Goniri.

Hours later, around 6am when mosques are filled with the faithful performing early-morning prayers, the suicide bombers struck in Damaturu, Yobe’s commercial center.

He said he counted 15 bodies and 12 wounded people rushed to the hospital in Damaturu, which has suffered dozens of attacks during the 6-year-old Islamist uprising.

The insurgents have stepped up attacks since Buhari, briefly a military dictator 30 years ago, took office in May pledging to halt the insurgency.

Most attacks take place in the northeast and have spilled over into neighboring countries that regularly suffer suicide bomb explosions and hit-and-run raids.

Amnesty International estimates 20,000 people have died in the insurgency.