You are here: Home / MidEastGulf / Women fighting against terrorists 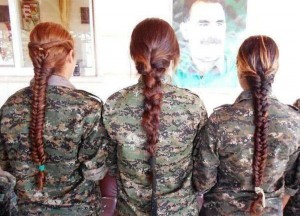 What would you do if they became a terrorist?

For Saliha Ben Ali, she doesn’t have to imagine. She founded SAVE Belgium after her son Sabri left their home in Brussels and died as a ‘martyr’ in Syria. Her husband received a phone call one day, saying he had died and was given no explanation of what happened.To this day she doesn’t know how he was killed. She went to the Syrian border to try and find answers. Now, speaking at Women In The World conference in London, she explains why she set up a charity to help other women in her situation.  ‘To me it was important to do something so I could grieve.’

Giving women a safe place to talk about how extremism has affected them, Saliha’s programme also teaches them how to see the signs of extremism in their family members.

Dr Edit Schlaffer, founder and executive director of SAVE Belgium explains that they launched a study of over 1000 women affected by ISIS and asked who they trusted to talk to, to speak out against extremists. ‘These women said, “we trust each other.”‘

Saliha says to women who might be affected: ‘Please try to find some help, speak about it and don’t stay alone in your room, thinking it will pass. My son was radicalised in only three months, by the time I realised what was happening it was too late.’

Baroness Shields OBE, minister for internet safety and security explains that many of these extremists are reached over social media, and that it’s important to reach out to impressionable young people in a positive way. ‘We can’t do it alone. That’s why these technology platforms are important, they can reach people all over the world.’

‘If we’re to talk about extremism abroad, we need to talk about it here too,’ adds Sarah Khan, co-Director and founder of Inspire – a UK based initiative helping fight against extremism. She explains that we need to reach out to Muslim women and find out who their female role models are. Often they’re not even allowed to get on a bus alone so it’s important to educate them on women’s rights, she says.

‘All evidence shows time and time again, when you empower girls, societies are less prone to extremism.’