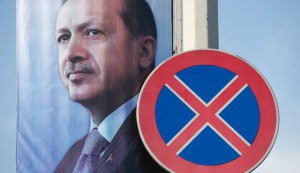 A record number of women, together with Christians, ethnic Kurds and Armenians, are set to enter Turkey’s parliament after Sunday’s election, a huge shift for a country that has long viewed demands for diversity as a threat to national unity.

Emblematic of the change sweeping parliament is the arrival of Dilek Ocalan, niece of Kurdish rebel chief Abdullah Ocalan.

Now 27, Dilek was 11 when her uncle was seized in Kenya by Turkish commandos, spirited back to Turkey and sentenced to hang, later to be spared the noose and banished to an island prison. For many Turks that may seem now like another world.

“First of all I see myself as a representative of women and youth,” she told local media. “I may be Kurdish, but I will be representing all those exploited, oppressed, ignored groups, all peoples, cultures, beliefs and languages.”

Her appearance in the Turkish legislature would have been unthinkable a decade ago. But Turkish leader Tayyip Erdogan braved the wrath of nationalists to open talks with Ocalan and his Kurdistan Workers Party, and Dilek it was who delivered many of her uncle’s public missives from Imrali prison.

The opening to the Kurds, after a war that has cost over 40,000 lives, is seen by many as one of the conciliatory, liberal reforming moves by Erdogan in his first years in power. It is not clear what now will be the fate of this peace process.

Ironically, it was the success of Dilek’s Kurdish party, the Peoples’ Democratic Party (HDP), that stripped the ruling AKP Party of its overall majority – and thwarted Erdogan’s drive for sweeping new powers. The HDP had drawn voters disillusioned with the more combative, authoritarian Erdogan of recent years.

The election marked a watershed in Turkish politics.

A total of 97 female lawmakers are due to enter government, accounting for 17 percent of Turkey’s 550-seat parliament. That level of female representation is still well behind the United Arab Emirates, Uzbekistan and most of Europe, according to World Bank data.

“In Turkey, it is regarded as a luxury for women to be involved in politics. We will fight to change this,” said Selina Dogan, an ethnic Armenian lawmaker with the secular, centre-left opposition Republican People’s Party (CHP).

It was still unclear whether the AKP founded by Erdogan in 2001 will form a coalition or a minority government.

The Islamist-rooted AKP – which critics say is looking to roll back Turkey’s long-entrenched secularism – was the only major party to see its number of women lawmakers drop, with 41 set to go to parliament from 46 now.

The HDP will send a total of 30 women to parliament. Its success, winning 80 of 550 seats, was one of the election’s biggest upsets.

Led by the charismatic Selahattin Demirtas, the HDP broadened its support beyond the Kurdish community, wooing young people and centre-left secularists who sensed perils in Erdogan’s drive for a two-thirds majority to change the constitution and forge him a powerful presidency.

The HDP was one of the parties to field candidates who were members of ethnic and religious minorities, as well as Baris Sulu, an activist who hoped to become the first openly gay lawmaker, although he failed to win a seat.

“For democratic stability this is very good news,” a Western diplomat told Reuters on the increased diversity in the parliament.

Four lawmakers from Turkey’s Christian minority were elected, two from the HDP and one each from the CHP and AKP.

Christians have been traditionally sidelined in the majority Muslim country. When a lawyer from the ethnic Syriac minority was elected in 2011, he became the first Christian in government in half a century.

Turkey’s roughly 3 million Roma will get their first parliamentarian after 38-year-old CHP candidate Ozcan Purcu won from the party’s stronghold city of Izmir.

Two members of the small Yazidi ethnic group were also elected, one of whom, Feleknas Uca, a former European Parliament member from Germany, is still learning to speak Turkish and wants to take her vow to become a lawmaker in her native Kurdish.

The new parliament will have three ethnic Armenians, a group that has traditionally faced some of the greatest discrimination.

Some Turks see ethnic Armenians as traitors bent on slandering Turkey’s global reputation, a conflict that goes back to the 1915 mass killings of Armenians.

Turkey accepts that Christian Armenians were killed by Ottoman forces during World War One, but denies there was any systematic attack on civilians amounting to genocide.

“It doesn’t matter how many Armenians there are in the parliament, what matters is our stance,” newly elected Garo Paylan told the Armenian daily Agos after the election outcome.

Like Dilek Ocalan, Paylan hopes the new face of the Ankara legislature will be matched by a new political spirit.

“I hope we will be able to change Turkish politics,” he said.