You are here: Home / Senza categoria / Women and the longevity of the Islamic State 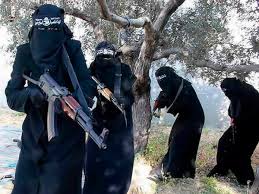 On February 7, 2016, Spanish police arrested seven suspects accused of sending guns and bomb-making materials to the so-called Islamic State in Iraq and Syria. The arrests themselves demonstrate the group’s continued international appeal. Furthermore, according to Spanish authorities, the leader of the cell had been in direct contact with an Islamic State member who had, on multiple occasions, specifically asked the cell leader to recruit women to travel to Iraq and Syria to become wives of Islamic State fighters. Despite increased military pressure on the group, the Islamic State remains dedicated to ensuring the longevity of the so-called caliphate—in which women play a key role.

As of 2014, 10% of individuals who had traveled to join the Islamic State from Europe, North America, and Australia were women. By May 2015, 100 women were known to have traveled from the U.K.; 119 from Europe, the U.S., Canada, and Australia; as well as 700 from Tunisia. On the surface, it seems counterintuitive that so many women would choose to join a group that has demonstrated such institutionalized brutality towards women. Female recruits nonetheless continue to leave their homes—sometimes bringing their entire families—in order to live under the dominion of the Islamic State. As with male recruits, these women have a diverse range of motivations driving them to travel to join the Islamic State.

Though their individual motivations may differ, women in the Islamic State occupy a central role in serving the organization’s ‘state-building’ ambitions, though far from the front lines. Beyond serving as wives to male members, women in the Islamic State care for the ‘Cubs of the Caliphate,’ and are responsible for rearing the next generation of fighters. The extremist fervor of the Islamic State’s female recruits is often reflected in their responsibilities: the all-female al-Khansaa Brigade patrols the Islamic State capital in Raqqa, doling out harsh punishments to women deemed to have violated strict social codes. There are also reports that female Islamic State members run the brothels where minority women are held as sex slaves. Women who have escaped from Islamic State captivity relate that the wives of their captors are often extremely abusive, violently lashing out for the most minor of infractions. Nisreen Assad Ibrahim Bahar, AKA Umm Sayyaf, was recently charged by the U.S. FBI for her role in the detention of American aid worker Kayla Mueller, killed in February 2015 in Syria. Umm Sayyaf played a leading role in the detention and torture of Mueller as well as several kidnapped Yezidi women.

While male recruits are often encouraged to come die for the group, the Islamic State recruitment strategy differs for women. Regardless of their motivations—be it extremist zeal, an attraction to violence, or investment in the idea of a utopian Islamic society—the longevity of the Islamic State is a pivotal selling point for the majority of female recruits. Given the increased military pressure on the group in Iraq and Syria—and the continued exodus of refugees from the region—the endurance of the caliphate is becoming harder for Islamic State propagandists to maintain. If women stop traveling to join the Islamic State to help establish an Islamic utopia, the legitimacy of the group’s professed caliphate would be further called into question.

The Islamic State aims to depict the territory under its control as a functioning society, one that not only requires fighters, but also doctors, engineers, and bureaucrats—and most importantly, women. Ultimately, women are valuable commodities for the Islamic State leadership, and their depletion is unacceptable. It is likely that more recruiters will specifically target women, as was requested of the Spanish cell. The Islamic State may attempt to grow its peer-to-peer recruitment networks, which are often more persuasive than anonymous online recruitment. This will mean women within the Islamic State will be increasingly used to reach out to family members and friends, encouraging them to travel to join the group. As with male recruits, female recruits may begin to be directed toward other Islamic State territories, particularly in Libya. This is especially likely for female recruits from Tunisia—700 of whom have already traveled to Syria and Iraq to join the Islamic State.