You are here: Home / Europe / Without controls, thousands of Isil fighters could use migrant crisis to ‘flood’ into Europe 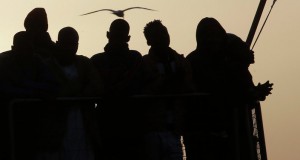 Thousands of Isil jihadists could use the migrant crisis to “flood” into Europe, Nigel Farage has claimed as he warned Britons not to “allow our compassion to imperil our safety”.

The UK Independence Party leader said there was a “very genuine fear” the extremists were exploiting the refugee crisis to get onto the Continent undetected.

He also appeared to blame Angela Merkel, the German Chancellor, over the deaths of refugees by saying she has “compounded” the problem by being so open to asylum seekers.

Mr Farage criticised her “very dangerous” stance and said she has helped create “huge incentives” for Africans to cross the Mediterranean in an attempt to reach Europe.

The comments are likley to prove controversial with campaigners and politicians encouraging the UK government to take in far more Syrian refugees.

It came as Mr Farage launched Ukip’s campaign to get Britons to vote to leave the European Union in the In/Our referendum, due before the end of 2017.

However the event in central London was dominated by his views on refugees after the image of a dead Syrian boy captured the human tragedy of the migrant crisis.

Mr Farage called the photographs “horrible, depressing [and] saddening” and said as a father of a young daughter he was “horrified” by the images.

Discussing the threat of extremists targeting the crisis, Mr Farage said: “When Isil say they will use the migrant tide to flood Europe with 500,000 of their own jihadists, I think we better listen.

“Five hundred thousand may not be realistic but what if it’s 5,000, what if it’s 500? And already one of the Isil terrorist suspects who committed the first atrocity against holidaymakers in Tunisia has been seen getting off a boat onto Italian soil.

“At the moment the EU’s common asylum policy has absolutely no means whatsoever of checking anybody’s background and I would say we must not allow our compassion to imperil our safety.”

Pushed on whether he thought Isil will use the crisis to try and enter Europe, Mr Farage said there was a “very, very genuine fear” that would happen.

Mr Farage also criticised Chancellor Merkel’s stance of saying she will consider applications for asylum from those refugees that reach Germany.

Hungarian authorities closed the main rail station in Budapest to hundreds of migrants this week after they attempted to board trains to Germany.

“I guess she had no choice but to say what she did because as members of Schengen, Germany has already been landed this year – and will continue to be – with very, very large numbers of people,” he said

“But what she has done is she has made the incentive for people through whatever means to try and get to the EU even stronger.”

Mr Farage said the crowds at the Budapest train station had come close to looking like a “stampede”, calling Ms Merkel’s position a “very dangerous thing”.

He added: “Given that Europe and Germany in particular has now given huge incentives for people to come to the European Union by whatever means, I am sorry to say that the shocking image that we saw of that young boy and the deaths in those lorries actually become more likely and not less likely. The only way to stop the deaths is to stop the boats from coming.”