You are here: Home / MidEastGulf / With the launch of Ramadi operations .. disclosure of leaflets calling ISIS elements to disguise themselves 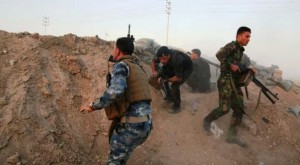 US official said that the organization handed out leaflets calling its fighters to disguise themselves in the uniforms of Iraqi security forces.

“Associated Press” quoted US military spokesman in Baghdad, Steve Warren, as saying that there are 250 to 350 of ISIS fighters in Ramadi, as well as a few hundred out of town on the northern and western surroundings.

Warren told journalists of the Ministry of Defense (Pentagon) “I think that retaking Ramadi is inevitable. But there will be a tough battle until that happens, and it will take some time.”

Warren added that US officials found leaflets distributed in Fallujah on ISIS fighters, asking them to disguise in the uniforms of Iraqi security forces then video tape themselves as they commit atrocities, such as murder and torture of civilians and blow up mosques.

According to a copy of the document, which was distributed to reporters videos should be distributed to television outlets “to portray the conflict as a civil war.” signed a security and military official called Abu Hajar al-Issawi, goes back to October.

Warren expressed his belief that the document is correct, but has not yet been reported that ISIS fighters masquerading as Iraqi forces.