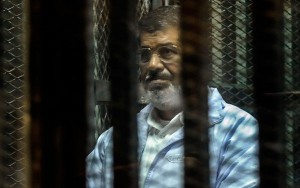 After becoming Egypt’s first freely elected president in 2012, Islamist Mohamed Morsi hoped his Muslim Brotherhood movement could emerge from decades of battle with the Egyptian state and transform the country.

Barely a year into his presidency, Morsi was toppled by the army following mass protests and thrown into jail. The final act in his downfall came on Tuesday when an Egyptian judge sentenced Morsi to death.

Wearing his blue prison suit in a metal court cage, the bespectacled and bearded Islamist listened calmly as judge Shaaban el-Shami read out the verdict in the case relating to a 2011 mass jail break.

Shami handed Morsi the death sentence along with five other Brotherhood leaders in that case. He also gave the former president a 25-year sentence in a case relating to conspiring with foreign groups.

Morsi appeared unfazed, smiling, and waving to lawyers as other defendants chanted: “Down, down with military rule,” after the verdicts were read out. Morsi’s court-appointed defence lawyer said he would appeal the death sentence.

The ruling marks another setback for leaders of the Muslim Brotherhood, and increases the chances of its youth taking up arms against the authorities, breaking what the group says is a long tradition of non-violence.

Morsi, accused by critics of abuse of power and mismanagement of the economy while in office, has been entangled in one legal case after another in unrelenting pressure against Islamists.

In this case, Morsi and fellow defendants including the Brotherhood’s top leader Mohamed Badie were convicted of killing and kidnapping policemen, attacking police facilities and breaking out of jail during the 2011 uprising against veteran leader Hosni Mubarak.

The court also sentenced Brotherhood leader Khairat el-Shater and 2 others to death for conspiring with foreign militant groups.

Morsi’s big ambitions to create an “Egyptian renaissance with an Islamic foundation” were short-lived after then army chief Abdel Fattah al-Sisi ousted him in 2013.

Sisi, now elected president, has repeatedly portrayed the Brotherhood as a terrorist group that poses an existential threat to Egypt.

That message has been well received by many Egyptians whose desire for stability made them turn a blind eye to Sisi’s crackdown on Morsi and his supporters.

Moursi, 63, says he does not recognise the court cases stacked against him, describing them as part of a military coup that rolled back freedoms won in the 2011 uprising that ended Mubarak’s three-decade rule.

He has only been seen in televised snippets from court sessions since his detention in 2013 and other leaders of the Middle East’s oldest Islamist group are all behind bars.

Long Egypt’s main political opposition, the Brotherhood did not imagine until 2011 it could rule the country, and some argue the decision to seek the presidency was a miscalculation.

While effective underground, it struggled to meet the desires of about 90 million Egyptians for better services and jobs, and Morsi was overthrown after a year in office by Mubarak’s former intelligence chief Sisi, who promised a roadmap to democracy.

Rumours that Morsi intended to give part or all of Egypt’s Sinai Peninsula to Palestinian militant group Hamas added to suspicions about him.

Following his fall in mid-2013, hundreds of Morsi supporters were shot dead at a Cairo protest camp and thousands of others rounded up, dashing the hopes of detained Brotherhood leaders who hoped the unrest would break the army’s grip on power.

Morsi’s year-long tenure was Egypt’s only period of civilian rule since the overthrow of the monarchy in 1952.

Egypt has defended its actions against protesters, saying they were given opportunities to disperse peacefully, and blamed Brotherhood militants for the violence. It says all defendants are given a fair trial by an independent judiciary.

The Brotherhood says it is still determined to win back power peacefully but, fearing arrest, can only afford to hold small and fleeting protests nowadays.

There are no signs either side is willing to reconcile, but carrying out a death sentence against figures such as Morsi or Badie could backfire by turning them into martyrs and re-energising Brotherhood members who have managed to evade arrest.

Western diplomats say Egyptian officials acknowledge privately that executing Morsi would be risky and are unlikely to carry out the sentences.

The peasant farmer’s son with a doctorate from the University of Southern California was a late entrant to the presidential race in 2012, after the Brotherhood’s preferred candidate Shater was disqualified on a technicality.

The Brotherhood, which won grassroots support through charity and once dominated professions such as the law, medicine and engineering, has survived crackdowns under successive autocrats in Egypt, birthplace of political Islam.

But some young supporters no longer look to the Brotherhood’s leaders for guidance. That raises the possibility they will lose patience and take up arms in a country where militants based in the Sinai Peninsula have killed hundreds of police and soldiers since Morsi’s fall.