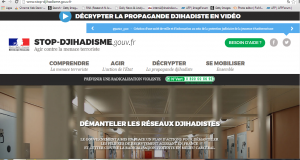 More than 500 people have left France to join Islamic State and other jihadi groups in the war zones of Syria and Iraq – more than any other country in Western Europe.

France has tightened some restrictions, including allowing families to flag their children to law enforcement and put a hold on their travel documents, and set up a hotline for worried parents to call.

“We are not the parents of a terrorist. We are victims,” says Baptiste, the father of a 17-year-old girl who left for Syria. He speaks to the camera directly, as do the four others.