You are here: Home / West Asia / Willing to work with India, Pak on counter-terrorism: China 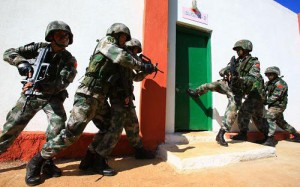 Ahead of Sino-India talks on counter-terrorism, China on Monday expressed “willingness” to work with both India and Pakistan in the fight against terror, raising hopes that it may take up with its all-weather ally New Delhi’s concerns about cross-border terrorism.

Responding to reports that the Indian government this time would push for greater cooperation from China on counter- terrorism, including pressuring Pakistan to act on terrorist groups based in that country, Chinese Foreign Ministry spokesperson Hua Chunying said counter-terrorism cooperation plays an important role in India-China relations.

“Chinese side is willing to stay in communication with India, Pakistan as well as other countries in the fight against terrorism,” she said, raising hopes that China, which has close ties with Pakistan, this time may take up India’s concerns over groups like Lashkar-e-Taiba (LeT).

“You mentioned Pakistan. Counter-terrorism cooperation is also part and parcel of China-Pakistan strategic cooperative partnership. The two sides are in sound cooperation in this regard,” she said referring to Pakistan military crackdown on East Turkistan Islamic Movement (ETIM) militants who carried out violent attacks in China’s Xinjiang province bordering Pakistan Occupied Kashmir (PoK).

During his last month’s visit to Beijing, Pakistan’s Defence Minister Khawaja Asif said that there were a “small number” of them (militants) in tribal areas.

“They are all gone or eliminated. There are no more there,” he had said. He also denied any differences between “all weather friends” Pakistan and China in addressing the problem.

Replying to a question about India’s concerns over terrorism, Hua said, “We believe the fight against terrorism in all forms will be conducive to peace, stability and security of each and every country as well as security and stability of the whole region.”

Ahead of the Wednesday’s meeting, Indian officials said in New Delhi that this time China’s help will be sought to prevail on Islamabad to rein on militants.

The counter-terrorism dialogue also may also touch on the sensitive issue of China blocking India’s demand in the UN to take action against Pakistan for the release of Mumbai attack mastermind Zakiur Rehman Lakhvi.

At a meeting of the UN Sanctions Committee in June in New York, India had sought action against Pakistan for release Lakhvi in the 26/11 trial in violation of a UN resolution but the Chinese representatives blocked the move on grounds that

Prime Minister Narendra Modi himself took up the issue with Chinese President Xi Jinping during their meeting at the Russian city of UFA on the sidelines of the BRICS leaders meeting in July this year.

Also India and Pakistan are due to join the China backed Shanghai Cooperation Organisation (SCO) as full members next year. The SCO is an international security alliance that consists of six member states and 5 observers from Eurasia.