You are here: Home / MidEastGulf / Will US inaction send PYD into Russia’s arms? 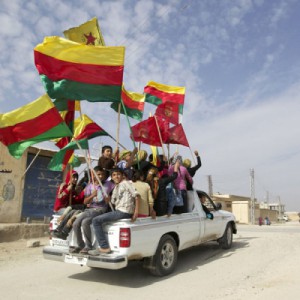 The Turkish military has recently admitted firing on Kurdish positions in Syria. The reason for this was given as a warning not to move west of the Euphrates River. The fear in Turkey is that the Syrian Kurds will be able to declare an autonomous zone, similar to that in Iraq, by connecting the Kobane Canton with the Afrin Canton and giving the Kurds a contiguous area bordering Turkey. The ruling AK Party is also facing a second election on Sunday 1 November that could either give them full control of the government or indicate that the Turkish people have decided a change is in order. The main threat to the AKP’s position is the Kurdish HDP which showed unusual strength in the last election.

While the AKP initially attacked PKK positions in Iraq, a unilateral cease fire on the part of the PKK has helped offset some influence that military action may have in swinging voter sentiment. The Syrian Kurds on the other hand present a different target set while still allowing Turkey to declare war on terrorism claiming the PYD is part of the PKK. The Turks have also declared the region between Kobane and Afrin to be an area that will be designated a safe haven in Syria. Neither the Turks nor the US have actually moved to make the area a no-fly zone or safe haven.

The PYD’s military, the YPG, has proven itself the most capable fighting force against ISIS. ISIS is the declared first priority of the US. The YPG has aligned itself with rebel factions in Syria, such as the Free Syrian Army, to battle ISIS. While there have been some breakdowns, the YPG maintains a tacit agreement with the Syrian army not to engage one another. The Syrian rebels, while fighting ISIS out of necessity, have a first priority of removing the Assad regime. Since Russian military assistance arrived in the region the relationship between the US and Turkey has become more complicated.

Supporting YPG has become increasingly more important to US policy since the failure of a US program to train and arm a Syrian force dedicated to fighting ISIS. Most Syrians recruited for this force only wanted to fight Assad and only a handful were ever successfully trained. In Syria this then leaves the YPG. The US must now find a way to continue supporting the YPG while at the same time controlling Turkey and stopping the attacks on a US ally.

United States policy has historically been that international boundaries not be changed. While Russia would argue that this was not the case in the breakup of the old Soviet Union, the facts are that old borders were reestablished. The problem with holding to this does not take into account the change in US leverage in the region. Should the PYD be assured a contiguous and autonomous region in Syria by Damascus, protected by the Russians, the US will need to decide how to react. Russian Iranian support to Assad will most likely be sufficient to keep the regime in place in the short term or maybe longer. Should a deal be stuck to redesign Syria into different areas, Alawite, Sunni, and Kurd the present administration will likely accept it leaving relations with Turkey hanging. While a member of NATO should Turkey decide to attack Syria while Russian forces are there would the US support or stay to the side.

The West needs to make some very fast decision at this point. Should Russia support the Kurds our strongest ally in Syria would have been coopted and it would strengthen Assad’s hold on power. Should the West accept the de facto situation on the ground it would be required to abandon Turkey and feed its fear of a Kurdish state springing up on its border which may include the Iraqi Kurdish region. This last would however go far in reestablishing US leverage and blunting increasing Russian and Iranian hegemonic desires.

ISIS is the current top priority enemy of the West as well as the Middle East and Russia. Turkey will have to be told that its control must end at its border. Support for the Syrian Kurds must be given even if it means protecting them from Turkey.