You are here: Home / MidEastGulf / Will Turkey fight Russia in Syria? 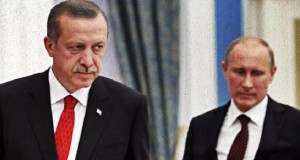 That might sound like the start of a bad joke, but such is the rhetoric between Russia and Turkey today—and it is a result of the war in Syria and the rapidly shifting balance of power in the Middle East.

During Russian President Vladimir Putin’s state of the nation speech to the Russian Federal Assembly on December 3, he accused Turkey of a “stab in the back” and being “accomplices of terrorists.” He even implied Russia might use force against Turkey: “We shall remind them many a time what they have done, and they will more than once feel regret for what they have done,” said Putin. “Our armed forces, secret services and law enforcement agencies have been mobilized to give a rebuff to the terrorist threat.”

Commenting on the downed plane, he said: “we were prepared to cooperate with Turkey on most sensitive issues and go further than their allies. Allah knows why they did it. Apparently Allah decided to punish the ruling elite in Turkey by taking their sanity,” he said.

Invoking Allah to the Federal Assembly, threatening military retaliation, and calling Turkey’s leaders insane might have played well in the Russian media, but it only heightened tensions with Ankara.

So the situation is not yet spiraling out of control, but it is in a tailspin.

As Stratfor wrote on December 8, for the first time Since World War I and the days of the Ottoman Empire, Turkey is reasserting itself in a major way—even challenging a superpower.

The bean counters and geopolitical strategists are at it too. Russia slapped $9 billion worth of economic sanctions on Turkish trade. The sanctions also hurt Russian businesses, but are hoped to hurt Turkey more. Construction on the TurkStream natural gas pipeline project was suspended (both countries are claiming they pulled the plug first). Turkey currently gets 55 percent of its natural gas from Russia.

Russian news agency Interfax has reported that Russia suspended work on Turkey’s Akkuyu nuclear power plant. Russia then moved attack and transport helicopters onto Turkey’s border in Armenia. Then on December 13, a Russian destroyer fired shots at a Turkish fishing vessel that was reportedly in its way. Additionally, a Russian submarine loaded with surface-to-surface missiles popped up off the coast of Syria and Turkey.

Just last week, Putin said that he saw “no prospect” of ties improving with Turkey, as its rulers had “decided to lick the Americans in a certain place.”

Turkey in turn has not-so-subtly reminded Russia that it controls the Syria Express—Russia’s supply route that runs from its massive Crimean naval port in Sevastopol across the Black Sea through the Turkish controlled Bosporus to the Russian base in Tartus, Syria, on the Mediterranean Sea. Tartus is Russia’s only warm water naval base. According to Stratfor, Turkey is reportedly slowing Russian naval traffic through the sea gate by making Russian captains submit to prolonged inspections. It is a reminder that Turkey could close the gate at any time and isolate Tartus.

“[W]hat is increasingly clear is that tensions between Russia and Turkey are now at least as intense as they were during the Cold War and show no signs of subsiding” wrote George Friedman at Geopolitical Futures on December 8. “The Turks have clearly decided that Russia, not the Islamic State, is the primary enemy.”

So this is all about what is happening. The next question is why?

Turkey has several motives for confronting Russia. First, the Black Sea is becoming a Russian lake. When Russia took Crimea from Ukraine, it captured much of Ukraine’s naval forces and freed itself from its lease constraints. As Stratfor points out, Russia is now free to beef up its naval forces—forces largely designed to counter Turkey’s fleet (December 8). Turkey sees the balance of power shifting within the Black Sea.

Second, when Russia pushed its way into Syria earlier this year, Turkey was suddenly confronted with a new Russian air base on its southern border. Having an isolated Russian naval base in Syria, a naval base that can be quickly cut-off from Russia’s Black Sea forces is one thing. Having Russian bombers in Latakia, just minutes from Turkish air space, is another. Add to that Russia’s air assets in Armenia, on Turkey’s far-eastern border. If the Turks are feeling encircled, there’s a good reason for that.

Turkey obviously wants to prevent encirclement. Meanwhile, it also has visions of reasserting its leadership among the Arab world. Erdogan has led Turkey in an Islamic revival away from its secular, post-World War II orientation established by Kemal Ataturk. Erdogan dreams of establishing a 21st-century Ottoman Empire. Syria is seen as a vital part of that empire. This means that Syrian President Bashir Assad and his forces must be defeated. Assad is a strong ally of Iran, and Iran is Turkey’s biggest regional opponent. Russia is supporting both.

Lastly, Turkey knows it must confront Russia soon. Falling oil prices are constraining Russia’s budget and economy, but it is not certain how long this will last. Russia’s war in Ukraine has turned the West against Moscow, and Western sanctions are still hurting the Russian economy. The longer Russia is on the ground, the more dug in it will become. The migration crisis and the fight against the Islamic State has given Turkey the cover it needs to intervene in Syria. And as a nato member, it is trying to draw Europe in on its side.

There is great debate as to what Russia wants. Russia’s naval base in Tartus, Syria, is certainly key. This is a base it has leased for close to 40 years. It may be Russia’s most important naval base. It is the only warm water base Russia has that does not depend on other nations for access. If Russia wants to operate a true blue-water navy, it needs Tartus, or a similar warm water port that does not freeze over in winter. Blue-water capacity is key to superpower status.

Just as important is prestige. Vladimir Putin famously remarked that the fall of the Soviet Union was the greatest geopolitical catastrophe of the 20th century. Putin is rebuilding the empire. To do that, he needs victories. He got one in Georgia in 2008. He got one in Crimea in 2014. Now in Syria, Russia has usurped the peacemaker role that America abdicated. As the Financial Times headlined last month: “Putin transformed from outcast to problem solver at G-20″ (November 25). Putin’s presence in Syria means that Western leaders are being forced to recognize the “road to peace inevitably runs through Moscow.” The future of Syria is a valuable bargaining chip for Russia.

Being involved in Syria also allows Russia to claim a vested interest in Middle Eastern affairs—and is an excuse to be involved. Just as Russian destroyers striking targets in Syria from the Caspian Sea in November sent a message to all nations within missile range, a Russian presence in Syria allows Russia to project power.

Lastly, any nation opposed to the United States is a potential ally for Russia. Iran fits this description. So Does Syria.

Here is what we can expect. Russia will not risk losing its naval base in Syria, so Russia will make sure it is involved in any political transition that will occur. It is currently propping up Bashir Assad’s regime, since it offers the most security for maintaining its port facilities. Russia is likely willing to spend a lot of resources to this end if it believes this is the only way to protect this base. This is not to say that Russia would not support regime change if it was confident its interests would be protected by the new rulers. Russia does not have any unique love for Assad. Russian support for Assad is a bargaining chip with the West that will be spent if and when the time is right. Russia’s recent increase in troops and the airfield it is maintaining to conduct strikes on Islamic State are in effort to secure this bargaining chip and confirm its inclusion in any international settlements involving Syria and the Middle East.

Neither Turkey nor Russia want a war that spreads beyond Syria. Both countries have similar sized economies, they are important trade partners, they have modern militaries—and they wield nuclear deterrents. Despite the angry and hostile rhetoric, geopolitical realities suggest a compromise will be reached. Some of the latest posturing is about increasing leverage for a future deal.

This is also what Bible prophecy suggests. The Bible says that in this end time there will be two distinct Middle East power blocs. One group, led by the king of the south described in Daniel 11, is a group of nations led by Iran. The other group in Bible prophecy is known as the Psalm 83 alliance. This alliance is prophesied to include both Turkey and Syria. Since the Assad regime is Iran’s most important ally in the Middle East, this suggests a radical change looming in Syria’s foreign policy outlook. Syria’s civil war and Turkey’s actions in that nation may be catalysts for that prophesied reorientation of Syria. Interestingly, this alliance also includes Germany. Will nato member Turkey be instrumental in bringing nato member Germany into this alliance?