You are here: Home / Analysis / Will Trump spark a new world order? 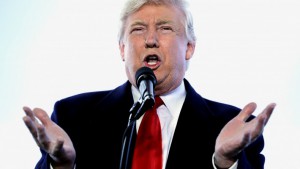 Donald Trump warned there would be “World War III over Syria” if Hillary Clinton ended up in the White House, but now he has been elected as president, will the United States’s foreign relations get better or worse?

The president-elect has pledged to “achieve a stable, peaceful world with less conflict and more common ground”. However, he also wants to rebuild the US military and has characterised his foreign policy as “America First”.

During his campaigning, Trump promised to increase the US active-duty army from around 475,000 to 540,000 and build a navy approaching 350 surface ships and submarines. “That’s more than the Navy’s goal of restoring the fleet to 308 vessels,” said Bloomberg.

In the Huffington Post in March, Matthew D Taylor warned a Trump presidency would be “a perfect recipe for World War III” as the world is “awash with percolating volatility”.

So far, however, relations with Russia are expected to thaw. Trump has said the two countries “could find common ground” in the fight against Islamic State in Syria and has described Vladimir Putin as a “big hero” in his home country. In return, the Russian President believes he will “get along very well” with the Republican.

The relationship now has “global consequences,” said the International Business Times: “As Russia asserts itself as a world power, having Trump as an ally would be invaluable.”

Norbert Rottgen, the chairman of the German parliamentary committee for foreign policy, told the New York Times that Trump’s election could lead to “the worst estrangement between America and Europe since the Vietnam War”.

Trump has shown “little interest in the institutions painstakingly set up after World War Two and spoken blithely of ripping up trade agreements and undermining western alliances”, throwing into  doubt the US’s future support for Nato allies, said Dominic Waghorn, the diplomatic editor at Sky News.

He added: “From Moscow to Beijing, despots, gangster governments and unelected elites have been rubbing their hands in glee.”

Martin Wolf, writing in the Financial Times, said Trump as president would “mark the end of a US-led west as the central force in global affairs” and the result would “not be a new order – it would be perilous disorder”.

The businessman’s “unpredictability and transactional approach to partnerships” would “irreparably” damage the US’s global alliances, while the democratic system itself would “lose much of its credibility as a model for the organisation of a civilised political life”, he wrote.

Wolf added: “Far from making America great, his presidency might unravel the world.”