You are here: Home / Analysis / Will Russia be held responsible for its “soldiers of fortune” in Syria?

As a rule, Russia conceals the number of losses in any campaign so the latest devastating blow on the units of its private military company called “Wagner” in Syria will not lead to any revelations by the Kremlin on the real death toll. Moscow may only recognize some insignificant losses, only to hide more significant ones, like reported by unian.info 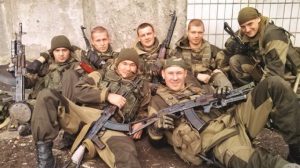 Moscow desperately needs to convince everyone that the number of those killed in action was rather small, that’s in order not to suddenly face repercussions as a result of that combat failure, even more so the one by the PMC Wagner, which is not part of the Russian armed forces and not an official government structure of any kind and, accordingly, can qualify as an illegal paramilitary group. These days, Russia is trying to at least somehow determine their status. Anyway, the Kremlin must be held accountable for the operations of its illegal troops.

As for Moscow’s potential reaction to the latest embarrassment in Syria, I suggest there will be no direct response. But, there should be no doubt that Russia will go for some tactical action, allegedly not linked to the losses sustained. And this means that sabotage and combat operations should be expected, disguised as anti-terrorist missions, for example, against the “Islamic state” or other terrorist groups. So, Russia will respond, but the response will be a masked one. They will employ spec-ops units, able to do their job effectively. In this way, Russia will attempt to prove to its adversaries that Moscow always delivers a tough response following losses on a battlefield.

As regards the statement by U.S. Defense Secretary Jim Mattis claiming the Americans had no accurate intel on whose troops exactly were in the attack area in Syria and that the Russians at that time said that their forces “were not there”… U.S. intelligence and other special services are well-versed in the situation on the ground, so they were well aware of whom those forces represented. But, of course, they don’t admit it in order not to disclose their capabilities. There is also a practice of “mutual silence”: there are both Russians, and Americans in different structures, units, and at different bases, but neither side speaks up about it. However, the intelligence is always aware of the situation and confirmed locations where contingents are stationed, as well as the legal status of certain paramilitary groups, including of that specific Russian group that has been deployed there.

The story with the annihilation of Russian mercenaries in Syria will also have implications within Russian borders. First of all, this will lead to image losses, including Vladimir Putin’s. In the heat of their presidential campaign, such reports are unlikely to be favorable to the country’s current leader. Therefore, he will keep concealing facts and refuting reports… At the same time, the opposition – Navalny, Yavlinsky, and even Sobchak – will further be disseminating the story to hit Putin harder during the campaign. In the end, the situation will to some extent add negativity to the already notorious image of both Putin and Russia, but no large-scale implications are to be expected. That’s because the Russian government will try to play down both the combat losses and the very significance of this news event. At the same time, the Kremlin will accuse politicians who speak up for conspiring against Russia and President Putin.

That is, the Russian authorities will exploit the news to discredit their opponents criticizing them. This will be done to ensure that the story does not resonate with the Russian public and does not cause indignation. After all, real people, Russian citizens, were killed in a faraway land… But this task is nothing new for the Russian government that has also been concealing the death of its citizens in eastern Ukraine.  Russia never speaks of hundreds of its KIAs in its foreign campaigns not to undermine its image as a powerful player. Will Wagner’s losses in Syria affect the number of those in Russia willing to become a mercenary, pursuing better money? Typically, structures as PMC Wagner welcome special-ops troops who simply receive another status, also receiving a completely different payment – this is huge money for them, indeed.

These are “soldiers of fortune”. They are perfectly aware of the risks. They do realize they might be injured or killed in war. Given the basic features of potential candidates for the job, I don’t believe the number of those willing to apply will decrease. These people can take risk and their psyche is rigid. More money more risk as they say. But the count doesn’t go by millions or hundreds of thousands. These are individuals who have already been to “hot spots” or trained in special units for such “job”. And such people don’t throw away an opportunity when times are rough…