You are here: Home / Analysis / Will Iraq’s Sunni provinces join in on protest movement? 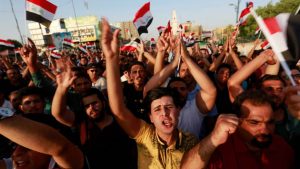 A major protest movement was set in motion in early July in Iraq’s southern and central provinces over a lack of services and against corruption. As a result, Baghdad residents held demonstrations in support of the southern protests, while the liberated provinces sought to support the southern provinces in any way possible, like reported by al-monitor.com.

However, civilian activists in Salahuddin and Anbar provinces were deterred from taking to the streets in support of those in south and central Iraq, for several reasons, most notably the security situation and prevailing fears that the Islamic State (IS) could use such protests to re-ingrain itself with the public.

On July 23, instead of taking to the streets, Sunni tribes of Hawija in Kirkuk province merely issued a press statement supporting the demonstrations in the southern provinces of Iraq, which call for establishing reform, eliminating corruption and providing services to citizens.

This support came a day after activists took to social media to call for demonstrations in Sunni provinces that had been under IS’ control. However, all Facebook events and invitations were soon canceled and deleted.

Mahmoud al-Hiti, an activist from Anbar, told Al-Monitor, “Some activists in Fallujah and Ramadi planned to organize demonstrations in support of southern and central provinces, but before long the security forces prevented such action.”

Hiti added, “Civil gatherings in Anbar have a hard time being heard” because of the “loud voices of tribes and political parties.”

Sunni tribal leaders believe IS is waiting for any possible demonstrations in the liberated provinces to exploit them and make its way back. Meanwhile, tribes are concerned about clashing with the Iraqi government forces again, as happened in 2013 when the tribes set up tents and cut off roads.

Marwan al-Jabara, a spokesman for the Salahuddin provincial council, told Al-Monitor, “The Sunni provinces share the same suffering as the southern ones, but the equation will differ if we take up protesting against the poor service and economic situation.”

Jabara added, “If we take to the streets, we will be accused of being affiliated with IS and wanting chaos to prevail. But Sunni provinces have long been plagued by chaos due to the corruption in Iraqi state institutions.”

Security authorities in Iraq are concerned that security breaches in the liberated provinces could smooth the way for IS affiliates to regain a foothold there or to invade new areas under the control of the Iraqi government.

An Iraqi national security source told Al-Monitor on condition of anonymity that individuals in Anbar have been coordinating to lead a demonstration in solidarity with the south, saying, “These individuals are supported by the banned Baath party in Iraq.”

The source added, “The national security forces, in cooperation with other security services, were able to put a stop to a plan, by Baath members abroad, to carry out demonstrations.”

Despite the lack of services in areas liberated from IS, in addition to economic problems and other issues related to detainees, Sunni community and political leaders are afraid to call for demonstrations, as their opponents or the Iraqi government could link this to IS and its return.

Atheel Nujaifi, a former governor of Ninevah province, said in a press statement, “We are working on steering clear of demonstrations in Sunni areas liberated from IS, because the situation there is too fragile and IS could take advantage of it.”

Residents of Sunni provinces want to express their opinions and protest their suffering because of a lack of services and the absence of a governmental role in certain issues, but as soon as they remember the experience of the 2013 sit-ins, they back down.

Muaid al-Windawi, a researcher at the Iraqi Center for Strategic Studies, spoke with the press about the possibility of Sunni provinces organizing demonstrations, saying, “Despite all calls, these provinces have concerns, especially after the use of excessive force in the demonstrations taking place in southern and central Iraq.”

Residents of Sunni provinces went through a lot during their protests against the governments of Prime Minister Nouri al-Maliki between 2006 and 2014. They were arrested and accused of terrorism. This is the main reason why they have been trying to avoid any confrontation with the Iraqi state as much as possible.

Ali al-Baidar, an activist from Salahuddin, told Al-Monitor, “After security officials warned activists and tribal leaders in the province about taking to the streets, no demonstration could be organized, be it in solidarity or in protest. We now immediately consider the possibility that we would be arrested, charged and suppressed again, despite our strong need to protest.”

The residents of liberated Sunni areas are highly motivated to protest against Prime Minister Haider al-Abadi’s government, which recently restored their areas. However, their fear of going back to the years of displacement and lack of trust between residents and the Iraqi government is stronger than the urge to protest.