You are here: Home / Analysis / Will Ethiopia’s Tigray conflict spillover into Eritrea, Egypt and Sudan? 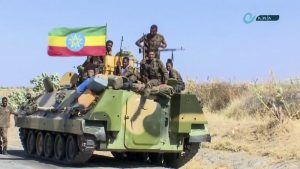 The Ethiopian conflict in its Tigray region continues to intensify with Tigrayans fleeing into bordering Eritrea and Sudan, like reported by theafricareport.com. But as the fighting gathers more steam, will repercussions be felt among its regional neighbours?

While Prime Minister Abiy Ahmed’s administration has strengthened its ties with Eritrea following the 2018 peace agreement, the TPLF fired missiles at the Eritrean capital Asmara on 14 November.

This demonstrated the conflict’s potential for wider regional destabilisation. It also speaks to the ongoing animosity between the TPLF and Eritrea which dates back to the war they fought against each other from 1998 to 2000.

TPLF leader Debretsion Gebremichael justified the missile attack by claiming his forces had been fighting 16 divisions of the Eritrean army since the beginning of the conflict. Allegations that were denied by both PM Abiy Ahmed and President Issayas Afeworki.

However, Asmara’s silence following the attack by the TPLF came as a surprise. Any official Eritrean support to Ethiopia would be “really bad for Abiy because it makes him look like he needs the Eritreans to control his own territory,” says Jason Mosley, a research associate at Oxford University’s African Studies Centre.

It could also invite other regional or global powers into the conflict. In this regard, Eritrea is an advantageous ally for Ethiopia, since it controls the northern border with Tigray.

The only other border is to the west, facing Sudan. It also hosts a major UAE military base in Assab. Getachew Reda, senior TPLF official accused PM Abiy of “enlisting the support of UAE drones based in Assab […]”.

While there is potential for military escalation, the fighting is mainly forcing people to flee. This includes Eritrean refugees currently in UNHCR camps in Tigray as well as Ethiopian residents.

The number of civilians seeking refuge in Sudan as a result of the conflict was estimated at 27 000 by the UN at the beginning of this week.

In support of Abiy and also for its own stability, Sudan has closed parts of its border with Tigray and stationed troops near Kassal. The country’s economic situation is already making internal peace difficult to achieve, notes David Kiwuwa of International Studies as the University of Nottingham.

Its eastern region has been volatile for several years and was rocked by pro-independence demonstrations in October. The human and potential weapons influx to this region could be a challenge to the fragile and freshly established Sudanese government.

Khartoum’s foreign policy has also significantly shifted under the new administration from an alliance with Iran, Turkey and Qatar to one with the UAE, Saudi Arabia, Egypt and the US. A choice it has to justify to its people when it is also hosting a Turkish military base and a Russian naval base is in the works.

Closer relations are envisioned with the US after being removed from its “state sponsors of terror” list and ultimately economic advantages once the sanctions are also lifted.

But with its northern neighbour Egypt, relations are more ambiguous. The “Nile’s Eagles-1” joint military exercise on 15 November was a new step in the Egypt-Sudan rapport. While it could influence Ethiopia’s position regarding the GERD (Great Ethiopian Renaissance Dam), Sudan’s government also has to maintain a tight balancing act. One reason is its border conflict with Egypt in the Halayeb triangle, an issue that has to be resolved if ties are to be strengthened.

There has also been mention of Sudan taking advantage of the war to reignite its border dispute with Ethiopia in the Fashqa triangle. Given the apparent Eritrea-Ethiopia alliance, it is highly unlikely Sudan would risk being at war with two countries. Rather, Sudan has offered to mediate between the Ethiopian government and the TPLF. Similar calls for negotiation have come from Uganda, the AU and the UN.

Offers the Ethiopian government has refused.

Impact on regional issues
The TPLF has continuously contested PM Abiy’s legitimacy, including GERD negotiations with Egypt and Sudan. Perhaps seeking an alliance with foreign powers would be another way to oppose him.

A lasting conflict in Ethiopia would highly affect itsties with Egypt with regards to the GERD. Trump’s defeat means the loss of a significant ally for Egypt. It’s unlikely that the future US administration under Joe Biden would speak of Cairo bombing the dam as was seen under Trump.

In the absence of international support, Ethiopia’s negotiating strategy is to keep the GERD dispute at the African Union level where it has a better chance. A position Sudan supports. However, the situation could get tricky in the coming months as the DRC, an Egyptian ally, will chair the AU starting February.

The war also impacts Ethiopia’s peacekeeping missions in South Sudan and Somalia. Ethiopia has withdrawn 600 soldiers from Somalia since the start of the conflict. Kenya is expected to withdraw as well, come 2021 – an election year for Somalia.

Furthermore, the continuous militarisation of the horn region and the arrival of new players such as China, the UAE and Turkey could present a risk of proxy-confrontations. “The focus on joint efforts to promote regional security is currently being superseded by external military deployments to the Horn that are driven by geopolitical, commercial and military competition, often with negative effects for regional stability,” says Neil John Melin, Director of the Programme on Armed Conflict and Conflict Management at SIPIRI.

Ethiopia’s neutrality towards all present foreign powers in the horn has perhaps helped it to keep the war an internal issue.

Bottom line
“We understand the position of the Ethiopian government and the value of the law enforcement operation. We hope for a quick resolution as it could drag in the region and has humanitarian consequences,” Meron Elias, a researcher for the Horn of Africa Project tells The Africa Report. But PM Abiy has also promised “the final critical act” is due to take place “in the coming days”.

One can only hope it ends soon with a lasting solution for the people of the horn.