You are here: Home / Analysis / Will Egypt intervene militarily in Libya? 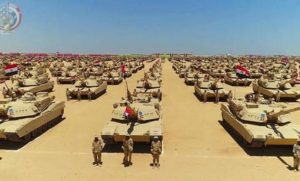 Despite his lengthy military background, the Egyptian President Abdul Fattah Al Sissi who rose to the rank of Field Marshall before removing his uniform has proved to be an accomplished diplomat and statesman, like reported by gulfnews.com.

Since he assumed office in June 2014 his prime focus has been on developing the economy, providing jobs, increasing tourism and overhauling his nation’s infrastructure.

He is a leader who has sought good relations with all major powers and works to find peaceful solutions to brewing conflicts.

Put simply, he is no warmonger and neither does he seek to use force in order to acquire territory or steal the natural resources of neighbouring states. Softly spoken, charismatic and known for his patience, it appears when it comes to a looming existential threat to Egypt posed by Libya, his patience is almost exhausted.

On Saturday, for the first time he put his cards on the table clearly delineating his red lines.

While stressing his preference for a ceasefire to be followed by a diplomatic solution to the conflict, he warned that any efforts on the part of foreign militias to capture the port town of Sirte, a gateway for the export of oil, or the Al Jufra airbase, currently home to Khalifa Haftar’s forces, would invite Cairo to launch a military intervention.

“Any military intervention by Egypt will be according to the principles of international law,” he said while pledging never to violate Libya’s sovereignty or threaten the Libyan people.

Mediation efforts
President Al Sissi’s recent thrust to mediate between the unelected Government of National Accord (GNA) and the Libyan National Army (LNA) involving the dismantling of militias, the removal of foreign mercenaries and the handover of all illegal weapons was praised by the US, the EU, Russia and most Arab states.

Unfortunately, the Islamist-weighted GNA led by Fayez Al Sarraj appears more concerned with holding on to the limited power it currently enjoys than the well being of citizens.

Al Sarraj has thrown a damp squib into the proceedings, vetoing an Arab League meeting to discuss the way forward after shamefully placing his nation under the protection of Turkey that has wormed its way into areas of Iraq, Syria, Somalia and its ideological twin Qatar.

Al Sarraj has placed his people’s fate in the hands of the Turkish President Recep Tayyip Erdogan who gets oil and gas exploration rights within Libya’s maritime borders for his trouble.

Brotherhood regime
And as an additional bonus his insertion into Libya of 15,000 or more hard line Syrian militias, now free to terrorise the population unchecked, succeeds in rattling his nemesis President Al Sisi who brought down Turkey’s former ally the destructive Brotherhood regime.

Moreover, just in case the GNA was seriously considering the Egyptian proposal, Turkey dispatched a delegation bearing a multimillion trade deal to Tripoli which could be construed as a timely bribe.

On this occasion Erdogan may have underestimated the resolve of the Egyptian leader to protect Egypt’s long and porous western border from terrorist incursions.

Turkish intervention
Turkey’s intervention was a blow to the ambitions of LNA chief General Khalifa Haftar whose forces were beaten back by Turkish drones just as they were closing in on the capital.

Haftar subsequently accepted the need for negotiations but such talks require two to tango and so far the other side insists on dancing to Turkey’s tune.

Cairo has now gained a new ally within Libya besides Haftar. On Saturday, Sheikh Mohamed Al Mesbahi who heads the Supreme Council of Libyan Tribes urged Egypt to expel or “exterminate” militias in the pay of Turkey.

He confirmed that Libya’s tribes would resist the Turkish occupation and he slammed Erdogan for pretending to be a liberator even as he arms and funds terrorist groups.

From a purely moral perspective, Egypt is on the side of right and deserves the backing of the Arab League as well as the international community at large.

The United Nations should withdraw legitimacy from the GNA which has turned its back on conflict cessation leading to free and fair elections and both the United States and Russia should quit sitting on the fence, instead issuing Turkey’s wannabe neo-Sultan with an ultimatum.

The French president is supportive of Egypt’s endeavours but now is the time for him to put his money where his mouth is especially when it was former president Nicolas Sarkozy who persuaded David Cameron and Barack Obama to tip the balance in Libya in the favour of rebels which ultimately sealed its destruction.

At this time when a crippling pandemic is robbing lives and setting back economic growth, no one with the possible exception of the Turkish president wants to be engaged in wars.

Al Sarraj could easily put an end to the heightened tensions by accepting talks in good faith unless he is scared of enraging his puppet master across the Mediterranean.

Alternatively Russian President Vladimir Putin could decide to sever relations with Turkey and throw his backing behind his Egyptian counterpart.

Until now, the world has played footsie with Erdogan. Turkey’s Nato membership, strategic airbase and its containment of millions of refugees ready to hotfoot it to Europe given the chance has allowed him to punch above his weight.

In the event that Al Sissi’s red lines are breached it is my hope that whatever the outcome, Egypt’s allies will grow a backbone and not leave Cairo to fight alone.