You are here: Home / Analysis / Will Damascus clash with SDF over status of regions post-ISIS? 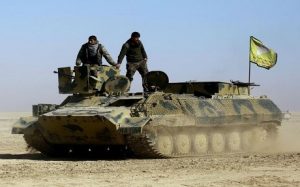 On Tuesday the Kurdish-led Syrian Democratic Forces (SDF) announced the formation of a “civilian council” to administer Syria’s Raqqa region after ISIS’ eventual expulsion. SDF spokesman Talal Silo said the SDF has already handed over towns captured from ISIS to this fledgling council, like reported by rudaw.net.

The Syrian Kurdish People’s Protection Units (YPG), the leading group in the SDF, have stressed that Arab elements of the SDF will lead the Raqqa offensive and Arabs from Raqqa will govern it following ISIS’ removal, in order to minimize the possibility of an Arab-Kurdish conflict.

Late last month the co-chair of the ruling Syrian Kurdish Democratic Union Party (PYD), whose armed wing is the YPG, suggested that Raqqa could become part of the Kurds’ democratic federal system.

“We expect [this] because our project is for all Syria … and Raqqa can be part of it,” he said before adding that “the people of Raqqa are the ones who take the decision on everything.”

The formation of the Raqqa council comes after the SDF’s establishment of the Deir ez-Zur Military Council to govern the country’s eastern province if they manage to capture that too, in December.

The only SDF military council to be actually put in place to date is the Manbij Military Council, which has administered that northwestern Syrian Arab city since capturing it from ISIS last August. The SDF had established other councils for the northwestern Syrian cities of al-Bab and Jarablus, but were unable to capture those cities before Turkey’s Euphrates Shield campaign did.

Meanwhile the Syrian Army is advancing against ISIS across central Syria. Russia’s state-owned Sputnik News recently quoted Syrian President Bashar al-Assad’s spokesman Bouthaina Shaaban saying that: “The Syrian forces will continue to advance in other areas, including Deir ez-Zur and in the direction of Raqqa.”

This Russian-backed Syrian regime offensive is unlikely to capture Raqqa before the US-backed SDF. The SDF are already in the city of al-Tabqa west of Raqqa after US forces airlifted them into battle there late last month. The last time the Syrian regime forces launched an offensive into Raqqa was in June 2016. However they were rapidly forced to withdraw from the entire province after ISIS reinforced their positions in Tabqa and launched a counteroffensive against them.

When ISIS is finally forced from Raqqa the regime will likely challenge the legitimacy of the SDF council there. It’s unclear how far the Americans would back the SDF against Assad after the ISIS threat is dealt with – especially in light of recent tensions between them, Assad, and Russia over the US rocketing of the Syrian regime’s Shayrat airbase earlier this month.

The future of Deir ez-Zur also remains in question. Any of these three possible outcomes could eventually unfold there:

1. ISIS overwhelm the isolated garrison of Syrian soldiers there and seize the entire city (possibly after withdrawing from Raqqa) before then losing it to a US-backed SDF offensive.

2. The SDF rout ISIS from part of the city and establish their council there, leaving the city divided between them and the regime forces. Not unlike the case with the YPG’s continued presence in Aleppo where the regime warned them last December to either withdraw or subjugate their forces under Syrian military command.

3. The Syrian regime arrive there before the SDF and seize the entire city before the council can establish itself there, like the aforementioned case with the Turks in al-Bab and Jarablus.

The SDF are reluctant to relinquish their hold over territories they’ve captured from ISIS through the sacrifice of their fighters and resources. They could possibly use Raqqa – and maybe even parts of Deir ez-Zur as well – in the future as a bargaining chip with the regime. Perhaps they could offer to cede control over it to Damascus in return for recognition of their federal system – which Assad recently called “temporary” – in the cantons and other areas of northeastern Syria they’ve controlled for years now.

SDF possession of these territories provide it with buffers against any potential future regime ground attacks on their territories as well as strategic depth against any potential Turkish invasion from the north. The main Kurdish cities of Kobani and Qamishli sit right on the Syrian-Turkish border in easy reach of Turkish artillery and tank fire. Therefore having territory controlled by friendly forces further south to withdraw to would enable the SDF/YPG areas to regroup and launch counterattacks. The SDF leadership are likely preparing contingencies to deal with such potential scenarios.

Ultimately whatever the case turns out to be it is clear that these future regions could become contentious, even bloody, flashpoints between the SDF and the Assad regime if their status is not conclusively resolved after ISIS’ removal.