You are here: Home / Africa / Will African Union succeed in Burundi? 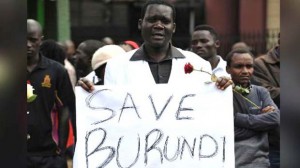 There is no doubt that the rhetoric of sovereignty has been employed by many ruling elites as an anchor to hide atrocities and abuse of human rights in their jurisdictions.
Here in Kenya, it has been one of the key points in efforts to deflate the intervention by the International Criminal Court in the 2007-8 post-election violence even as the Kenyan state did nothing to investigate and bring to book the perpetrators or indeed undertake any meaningful national healing process. The report of the Truth, Justice and Reconciliation Commission remains unimplemented with the current ruling elite generally perceived to be hostile to any national undertaking that could open up the country’s past for further scrutiny. State sovereignty remains a key anchor in international relations. Most treaties and other instruments of international law recognise the sovereignty of nation states. In a way, the proclamation of state sovereignty itself is the foundation of international law. However, the tension between morally guided international law principles and realist/statist-oriented notions of sovereignty persist. And it is within this tension that the ongoing crisis in Burundi is now pitched. Pierre Nkurunziza’s purported election as president in July 2015 is the most significant cause of the ongoing crisis in that country. “Purported” because the election lacked legitimacy from the word go having gone against the Arusha Peace and Reconciliation Agreement, the key source of legitimacy for Nkurunziza’s previous years as president elected by both Parliament and direct suffrage.
As expected, Nkurunziza has signaled that any deployment of African Union peacekeepers will go against the sovereignty of his country and amount to interference.
He has threatened to fight the African Union (AU) force if deployed. It is possible of course that Nkurunziza craves an external ‘enemy’ to help galvanise the Burundi population, hence the current rhetoric. All this is happening at a time when an insurgency against his regime seems to be taking shape and even as killings, especially of young men, blamed on the regime, continue in key Bujumbura suburbs. The AU is now faced with the daunting task of deploying peacekeeping troops in a country where the regime has already declared such troops an invading force. How the AU deals with this will determine the future of the vaunted but largely untested mantra of “African solutions to African problems”. The dilemma the AU faces is underscored by attempts made last week by Commission Chairperson Nkosazana Dlamini-Zuma to reassure Nkurunziza, the “born again Christian”, that the AU mission was only aimed at bringing peace to Burundi and not to pursue any “other agenda”. What other agenda would there be? This perhaps is the big question and the elephant in the room. The legitimacy of the AU’s intervention is anchored in the Constitutive Act, which mandates the AU to intervene in situations such as Burundi’s. The power to intervene in the “internal” affairs of states was indeed a key departure from the former OAU.
The historic mission of the OAU was decolonisation and safeguarding of African States against aggression within that context.
Both the Constitutive Act and the Peace and Security Protocol of the AU provide for such intervention. Article 4 of the Constitutive Act asserts the right of member states to intervene in a member state in case of war crimes, genocide and crimes against humanity. These provisions are also borrowed by the Peace and Security Protocol. Article 4 of the Constitutive Act should be read together with provisions of the Non-Aggression and Common Defence Pact of 2005. This is the instrument that commits states to “prohibit and prevent genocide, other forms of mass murder as well as crimes against humanity”. The Peace and Security Council has made various decisions regarding situations of conflict. The lessons it has learnt in these situations including Darfur, Somalia, Comoros, Democratic Republic of Congo (DRC) and Ivory Coast will be important in resolving the current dilemma. Needless to say, failing in Burundi is NOT an option for the AU.
standardmedia.co.ke