You are here: Home / MidEastGulf / Will Abadi allow US Special Forces to operate on their own? 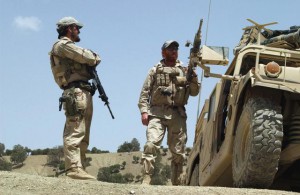 Under the latest “adjustment” in US military operations in Iraq and Syria, President Obama has approved the deployment of a larger contingent of US Special Forces into Iraq.  Unlike previous “train, equip and advise” deployments, the new Special Forces teams will be operating independently of the Iraq Army, conducting “decapitation” operations against ISIL targets.

The expanded Special Forces deployment comes as the result of the latest Pentagon assessments that the Iraq Army is still disjointed, plagued by political interference from Baghdad politicians under the influence of Iran, and will not be effective against ISIL strongholds for the foreseeable future. Iran continues to exert significant influence on the Dawa Party, through former Prime Minister Nouri Al Maliki, and Iranian-backed Shia militias continue to conduct operations independent of the Iraq military command.

One feature of the change in the US military mission in Iraq is that the American forces will no longer be sharing intelligence with the Iraq Army or the government in Baghdad. This is due to the expanded Iranian and Hezbollah penetration of the Iraqi intelligence services. The US had already pulled back from intelligence sharing since the announcement more than a month ago that a joint intelligence center had been established in Baghdad, involving Iraq, Iran, Russia and Syria. But this is a further step towards Washington conducting independent military operations inside Iraq.

The US Special Forces already deployed inside Iraq have developed extensive intelligence profiles of ISIL’s operations and key personnel. ISIL’s communications systems have been reportedly penetrated at a local level, and under the new rules of engagement for US Special Forces, the Joint Special Operations Command (JSOC) will be acting unilaterally, without consulting or coordinating with the Iraq Army, when actionable intelligence is obtained.

The new US Special Forces mission is modeled on the night raids against Taliban and Al Qaeda targets in Afghanistan. In effect, US commanders in Iraq concluded that Iraqi military units were incapable of acting on short notice to conduct such missions, and will, therefore, be operating independently. An estimated 200 additional US Special Forces are expected to be arriving in Iraq as an Expeditionary Targeting Force in the coming days.

The US deployment has created a major political problem for Prime Minister Abadi, who is already under fire from within his own ruling Shia coalition in parliament. A number of prominent Shia parliamentarians, representing powerful militia groups, have rejected the US expanded deployment, and threatened to bring down the Abadi government if the US deployment goes ahead.  Some Shia officials, including Jafaar Hussaini of the Kata’ib Hezbollah and Mohammed Naji of the Badr Organization and the Hashid Shaabi (Popular Mobilization Force) militia, have threatened civil war if the US Special Forces are allowed in the country.

On Dec. 3, in response to that pressure, Prime Minister Abadi’s office issued a statement that Iraq “will consider any country sending ground combat forces a hostile act and will deal with it on this basis. The Iraq government is committed to not allowing the presence of any ground force on the land of Iraq.”

Secretary of State John Kerry countered by claiming that he had fully briefed Abadi on the expanded US mission, and that he believed the official statement was more directed at domestic critics of the planned Special Forces deployment than at the US. Nevertheless, there is a concern among Shia militia leaders and Dawa Party officials that the Special Forces could eventually be turned against the Shia forces. A number of Shia militia leaders are already on the US terrorist list.

The controversy has been compounded by the deployment of additional Turkish military forces to the Mosul area, where they have been training Sunni tribes, former local police, and Kurdish militias for over a year.

The bottom line for the Pentagon is that the multi-year efforts to stand up an effective Iraq Army have run aground, and Washington is losing political ground to Iran and, indirectly, to Russia. President Obama’s longstanding policy of refusing “US boots on the ground” in Iraq or Syria has given way to a more flexible and pragmatic position, driven by the poor results of the US operations against the ISIL to date.

In another signal of that shift, President Obama was also recently forced by his military advisors to lift the embargo against striking ISIL infrastructure targets in Syria, particularly the oil refineries and tanker trucks, and the power plants. For 18 months, the Joint Chiefs of Staff and CENTCOM have been asking for Presidential approval to bomb vital ISIL infrastructure, with no success.

Military planners had been arguing, all along, that the danger of civilian casualties and the destruction of vital infrastructure needed for a post-ISIL, post-Assad reconstruction, were secondary to the mission of cutting off the Islamic State’s ability to govern in the territories it controlled, by generating millions of dollars a week in black market revenue. Finally, that message got through to the President, and the target ban has been recently lifted.

While there is little area of agreement yet between the United States and Russia, particularly over the issue of the future of President Assad, Kerry and his Russian counterpart Sergei Lavrov are working together on a United Nations Security Council resolution, demanding cooperation of all UN members in shutting off the finances of the Islamic State.