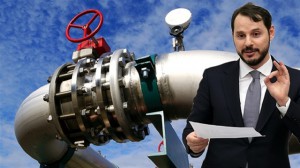 Wikileaks released a cache of emails, demonstrating his insider knowledge of Powertrans that have had complete monopoly of Iraqi Kurdistan’s roads and rail system into Turkey, while Albayrak denied in the past that he had any connections to Powertrans, massdar news reported.

Powertrans have consistently been accused of facilitating ISIL blood-oil from reaching the fields in Iraq to Turkey.

Julian Assange, the founder of WikiLeaks, justified the email release because of Erdogan’s crackdown on free media.

“The people of Turkey need a free media and a free internet,” Assange said.

In December 2015, sources close to the ISIL confirmed that Ankara supplies the Takfiri militants with weapons and ammunition through Qatari brokers in lieu of the oil the Takfiri terrorist group sells to Turkey through the same channel.

“The ISIL regularly sells crude it obtains from Iraqi and Syrian oil wells to Turkey through some Qatari middlemen,” the Arabic-language Al-Akhbar newspaper quoted unnamed sources inside ISIL as saying at the time.

The sources reiterated that Turkey also sold part of the oil it bought from the ISIL at cheap price to some East European countries.