You are here: Home / Mediterranean / Wife of Mokhtar Belmokhtar captured in Cyrenaica 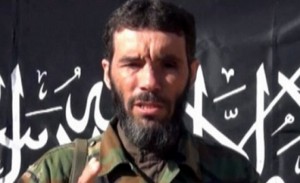 The wife of Mokhtar Belmokhtar, the Algerian-born head of Al-Qaida in the Islamic Maghreb (AQIM), is reported to have been tracked down and arrested near the desert town of Mechili, some 100 kilometres south of Beida. She and another Tunisian woman, together with their driver, were caught heading towards Jufra, south of Sirte, according to the Libyan news agency LANA.

It quotes the spokesman of the Beida government’s anti-terrorism and subversion directorate, Sami Al-Matrih, saying that they were ambushed following a tip-off.

It is being suggested that they were on their way to meet Belmokhtar in southern Libya.

A number of reports, moreover, claim that he was the prime target of the air raid on Gurdah Al-Shatti six days ago in which a number of AQIM fighters were said to have been killed.

Although the anti-terrorism directorate has said that the one of the two Tunisian women arrested is Belmokhtar’s wife, it has not named her.

It was not previously recorded known that he had a Tunisian wife. He is known to have had four but they were supposedly all from Mali.

Belmokhtar has used southern Libya as a base on numerous occasions. His notorious attack on the January 2013 seizure of the In Amenas gas facility in Algeria in which 40 people died, almost all foreigners, is believed to have been organised from Libya.