You are here: Home / Analysis / Why Yemen conflict has become another Syria 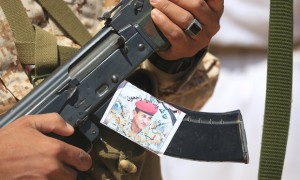 The brazen attempt by Houthi rebels to sink a US warship patrolling off Yemen marks a potentially significant escalation of a conflict that has been alternately fuelled and ignored by the western powers. The attack by the Houthis, whose main backer is Iran, coincides with an unprecedented ballistic missile strike 325 miles inside Saudi territory and suggests a spreading, region-wide conflagration could be nearer at hand than previously thought.

Insurrection and revolt have been endemic in Yemen since the early part of this century. But the conflict intensified in March last year when Saudi Arabia, Iran’s main rival, launched a large-scale intervention, backed by a coalition of Arab states.

Since then an estimated 10,000 Yemenis have died and many more have been injured, displaced or have faced famine conditions. The US and Britain back the Saudi coalition and have provided limited practical support such as intelligence-sharing and training, but have eschewed direct involvement in Yemen. The exception is the CIA’s repeated drone strikes, including those against alleged Islamic State and al-Qaida in the Arabian Peninsula terrorists.

As in Syria, the Obama administration has favoured a hands-off approach, preferring to act through proxies rather than engage directly. This diffidence stems from Barack Obama’s fear of the US being sucked into more Middle East wars. It is also the byproduct of his controversial attempt to mend fences with Iran through last year’s landmark nuclear deal.

The Syrian war has monopolised Washington’s diplomatic energy to the disadvantage of Yemen and other regional conflicts, such as Israel-Palestine. The unintentional message to Tehran and the Houthis has been that Yemen is not a priority. Partly as a result, repeated UN efforts to achieve some kind of peace settlement have been severely underpowered.

But unpredictable events upset the most careful policy. The US now risks getting sucked in more deeply. The American destroyer targeted at the weekend was in the area because of a previous Houthi attack on a United Arab Emirates vessel, part of the Saudi-led coalition. The destroyer belongs to a three-warship deployment in the Red Sea-Gulf of Aden area, armed with Tomahawk cruise missiles and carrying US special forces commandos.

Riyadh has been shaken by an unprecedented Houthi ballistic missile strike on Taif, deep inside Saudi Arabia.

Meanwhile, the weekend bombing of a Yemeni funeral ceremony attended by Houthi notables, killing at least 140 people, has further upset Washington’s calculations. Saudi-led coalition warplanes are widely held responsible. It was the latest in a string of atrocities involving civilians to be blamed on the Saudis.

The US strongly condemned the bombing and said it would review its support for the Saudi operations. Its angry words will further strain relations with Riyadh. The bombing also enables Russia and Iran to accuse the US of hypocrisy in Syria, where it broke off diplomatic talks following another outrage – the destruction last month of a UN aid convoy.

Sensing perhaps that a wedge can be driven between Riyadh and an embarrassed Washington, Iran has been quick to complain to the UN about the funeral bombing. For a country guilty of serious, systemic human rights abuses, this may seem a bit rich. But it comes on top of western acceptance of the blocking by Arab states of a full UN human rights council investigation into atrocities in Yemen.

Watching a power vacuum develop in as Obama nears the end of his term, hardliners in Iran’s Revolutionary Guards appear ready to up the ante not just in Yemen but in Iraq, where the Shia-led government is a close ally, and in Syria, where Iran’s own fighters and those of Hezbollah are keeping Bashar al-Assad’s forces on the offensive in Aleppo.

Some analysts suggest an expansionist Iran, like Russia, is seeking permanent military bases on the Mediterranean in return for its help. Iran’s behaviour will disappoint those who backed Obama’s opening to Tehran and convince sceptics, such as Israel’s leadership, they were right to predict Tehran would maintain its feud with the west, continue to seek regional dominance and go on trying to destabilise predominantly Sunni Muslim Saudi Arabia and its Gulf allies, wherever and whenever it can.

Neglected diplomatically by the US and Europe, let down by UN human rights watchdog, fuelled by US and British arms sales and exploited and manipulated by Iran, the conflict in Yemen is another Syria, on a smaller scale. Like Syria it has increasing potential to blow up in the west’s face.