You are here: Home / MidEastGulf / Why we need a three-State solution for Iraq 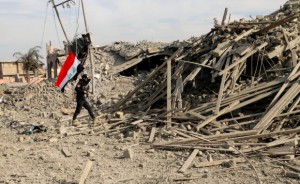 Iraqi forces reclaimed Ramadi from the Islamic State last week, but according to Al Jazeera, 80 percent of the city is destroyed and Islamic State has counter-attacked.

Shattered Ramadi is symbolic of shattered Iraq and one must ask, what is the future of this battered country? Perhaps the most logical, wisest course of action is to allow Iraq to splinter into three independent countries: one for Kurds, one for Sunni Arabs, and one for Shiite Arabs.

Ramadi was a city of nearly one-half million inhabitants, capital of al-Anbar Province in the old Sunni triangle. It is primarily Sunni Arab and is a strategic crossroads at the Euphrates River, sitting aside key highways to Syria and elsewhere. Ramadi is the heartland of the Sunni leadership from the old Saddam Hussein days and in the past decade has been fought over by tribal sheiks, Al Qaeda in Iraq, U.S. and Coalition troops, Islamic State, and the mostly Shiite Iraqi military and para-military of today.

Today Ramadi is in ruins. Thus it is emblematic of its country: there is no longer a unified Iraq.

Instead, there is a region of Kurdish influence, a contested region of Sunni influence (much of which is held by Islamic State), and the Baghdad-controlled area dominated by Shiite Arabs backed by Iran. It is clear that the only way for there to really be equilibrium is for the territorial integrity of Iraq to no longer be the only political possibility for the future.

What makes the most sense is for the West to implicitly acknowledge that the Shiite-dominated areas will be at least nominally within the Iranian sphere of influence if that is what Baghdad wants. Second, there will have to be a Sunni-Arab home, largely based in the Sunni triangle. Parts of the north will fall under the sovereignty of an independent Kurdistan. It is possible to draw the lines so all three political entities realize petroleum income.

For the world to finally realize this Balkanized vision of Iraq should not be so difficult. The old Ottoman provinces of Mosul, Baghdad, and Basra are roughly analogous to this plan. In the worst case, this plan contains Islamic State (and whatever form its successor takes) within borders of Kurdistan, Shiite Iraq, Saudi Arabia, Syria, and Jordan. Turkey and Iran are buffered from direct contact with whatever form the new Sunni state ultimately takes. Sunnis in that geographical region, often connected by long-standing tribal ties, can fight among themselves to establish an enduring political order and make peace with their neighbors. It is up to the neighborhood, with some support from the outside, to contain this violence.

To be clear, this largely separates Iraq’s Sunni and Shiite populations. The Shiite majority have never trusted the Sunni minority because Saddam Hussein privileged his fellow Sunnis. The past decade has seen the Shiite wreak vengeance on Sunnis and this trend is unlikely to stop.

It is time to recognize an independent Kurdish state. A Kurdish nation already exists and a new Kurdish political entity, freed from its long but uneasy association with Baghdad, could be an important political counterweight in the region. A Kurdish state, taking land from eastern Syria and primarily from the Kurdish regions of Iraq, would be able to sustain itself not simply on oil revenue but also as legitimate center for regional trade and technology. A Kurdish state could take pressure off the Kurdish question in Turkey (and perhaps in Iran) if the international community made it clear that independence was conditional on clearly defined borders and the opportunity for migration by ethnic Kurds, if they chose, to the new Kurdish state. A Kurdish state would be a strong U.S. ally and could also partner with Israel, Jordan, and more moderate Arab and Central Asian countries due to its cosmopolitan Sunni majority and could likely find a rapprochement with Turkey and the Assad regime.

A three-state solution for Iraq is not a new idea: it was bandied about in some quarters in the run-up to the 2003 invasion, but the idea was never taken seriously by leaders in the West. That was a mistake. The Coalition was right that the majority of Iraqi citizens did want to be liberated from Saddam Hussein in 2003 but President George W. Bush, British Prime Minister Tony Blair, and others simply could not conceive of violating the international norm of sovereignty to the point of killing a country and creating three new ones in its place. This crazy logic continues to hold in other places, such as not recognizing an independent Somaliland (despite relative peace, its own currency, etc. in contrast to neighboring Somalia).

A three-state solution will likely keep Bashar al Assad in power in a rump Syria and provide stability. It will enfranchise up to 25 million Kurds and will provide a defensible Shiite-majority Iraq. Shiite Iraq can remain under the patronage of Iran, but this limits Iran’s influence over time.

All three of these entities, along with Jordan and Saudi Arabia, would thus box in (or “contain”) a Sunni Arab state: its inhabitants would have to decide for themselves, one way or the other, whether or not to follow Islamic State or some other form of government. In other words, promote the creation of an Iraq-version of Croatia, Slovenia, and Serbia without the insanity of a constantly-disintegrating Bosnia requiring billions of Western dollars. It is time for a smart, three-state solution.