You are here: Home / Analysis / Why Washington should coordinate its counterterrorism strategy in Maghreb and Africa with Rabat

Two recent developments by major U.S. foreign policy and security think tanks are evidence of the growing public, as well as US government interest, in security issues related to Maghreb, and interest in increased cooperation in that arena, like reported by moroccoworldnews.com. 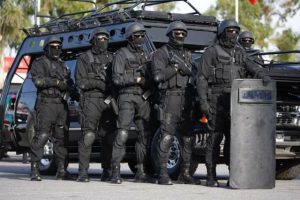 First, the Foundation for Defense of Democracies (FDD), issued a report on Al Qaeda in Islamic Maghreb: a Financial Assessment, the seventh instalment in its series dealing with the financing behind various terrorist organizations around the world. The focus of this report is less on the current state of cooperation with Morocco, Algeria, and Tunisia, and more on providing a comprehensive background of AQIM’s success and proliferation throughout West Africa.

The context for this report is the growing role of the United States forces in counterterrorism operations throughout Africa, from Nigeria and Niger to Somalia.  According to the report, France is taking the lead on combating AQIM in West Africa, but the US should continue and grow its role in providing logistical support, training, and humanitarian aid, contingent on evidence of the relevant governments fighting corruption, which has been shown to facilitate the spread of terrorist organizations and criminal groups, which frequently partner with the terrorist organizations.

Likewise, the report observed that up until 2013, AQIM mostly financed its terrorist operations through hostage taking for ransom, until the members of the G8 signed an agreement refusing to pay ransom for any future abductions. Nevertheless, other Western countries have made significant ransom payments in the form of designated humanitarian aid, even as late as 2016 and 2017. The bulk of AQIM’s financing, the report asserts, comes from cigarette and drug smuggling.

Al Qaeda has also been successful in smuggling people, including terrorists and refugees, to Europe via routes in Morocco and other states. Part of its success includes porous borders, lack of control over Sahara, successful intermarriage with tribes in the relevant countries, taxation, and various commercial enterprises. Countries such as Mali, Chad, and others frequently did not do enough to enforce the break-up of the local criminal gangs, and did not go aggressively after Al Qaeda’s alliances with the Latin cartels, and other transnational organized crime groups, which facilitated the various criminal activities financing the terror.

The report warns, however, that even aggressive breakup of financial networks, disruption of the activity on the ground, and a crackdown on human trafficking, may not be enough to finish off Al Qaeda, because of its flexibility and the ability to blend in with other groups and take members from other terrorist networks, such as the failed ISIS. Additionally, even taking affirmative action to build up the states and assist the governments against the slow takeover by the terrorist organizations is a very long term project, which may not work. If France, after reaching some success in Chad, chooses to withdraw, Al Qaeda or other organizations, can utilize this opportunity to move in.

What of the US?  The US has been reluctant to engage in overly extensive groundwork operations, but the growing threats from terrorist African networks have increased the boots on the ground. The concern about US military getting stuck in another long-term and unsuitable national building exercise remains at the forefront of criticism of this policy. Likewise, there are doubts about the efficiency of spreading the US military so thin across so many countries, while dealing with semi-failed states, having little leverage, and even less local knowledge. And France, while endowed by the formidable Foreign Legion, as well as admirable Special Forces, has a poor reputation for its past colonial practices, and seeming lack of ability to prevent the proliferation of extremists in its own territory. Frankly, even addressing corruption is a difficult question. Mauritania, for instance, has a poor record of diverting US counterextremism aid towards going after abolitionists (slavery still exists in that country even without the terrorist smuggling).

The second development, CSIS panel on Security in the Maghreb: Identifying Threats, Assessing Strategies, and Defining Success, attempts to address a somewhat more promising question of cooperation with the three countries of the Maghreb. Some of the same issues as outlined above remain in question. Algeria’s junta is hopelessly corrupt and ineffective, perhaps willingly facilitating the passage of assorted terrorists to the Morocco border and surrounding areas. Tunisia, though having an increasingly moderate and cooperative government, has been the source of the majority of terrorists flowing into Europe.  And Morocco, quite successful in its own counterterrorist strategy, has to deal with the international tensions over the Western Sahara issue, and ongoing disputes with Algeria, as well as continuous flow of foreign imams, which seek to radicalize the population in the peripheral areas, in particular.

The obvious conclusions to the questions raised by the two events are as follows:

First, Morocco, seemingly best suited as the success model of counterterrorism effort in the Maghreb, should take a leadership role regionally and promote its model in Tunisia, to the extent it’s possible in Algeria, and perhaps lend its expertise and assistance in West Africa as well. Its recent reentry into the African Union positions Morocco well towards integrating its “best practices” towards more troubled countries.

Furthermore, unlike France, Morocco is indigenous to the region, has more credibility, and unlike the French troops, is there to stay and thus is more reliable for the long-haul. Morocco’s history of intelligence cooperation with Europe demonstrates its strong grasp of local issues, and particular cultural flexibility, will make for a less painful transition in dealing with the diverse countries, populations, and approaches that are currently part of the major stumbling block facing the Western allies.

Joint US-Moroccan counterterrorism training could be expanded towards an assortment of operations all over the continent, and local knowledge and expertise a country interested in wider investments and business in Africa can supplement the short-term military operations, which have thus far, been the hallmark of US success. Moroccan growing role in strengthening what could otherwise be questionable alliances can provide the key link towards meeting the long term objectives of deterring transnational threats that the United States military strategy in Africa is currently lacking.

Second, one of the recommendations has been to build up the failing or struggling nation states across Africa to help delegitimize insurgent terrorist groups. Once again, none of that is truly possible without long-term presence and local expertise, as well as clear goals as to the assorted governance issues and civil society building. US would do well to focus its effort on joint efforts in empowering local Moroccans and their blossoming NGOs, and allow the local experts to transfer the base of knowledge across the region. That is not to say US does not have legitimate interests in investing in Africa and building stronger relations with the full spectrum of African countries.

However, to avoid past mistakes, it should have a credible and legitimate partner, who can serve as a bridge in building mutual understanding and helping avoid intercultural fiascos and disappointments. Backing plausible grassroots initiatives and skill-building are two of the efforts US could be particularly helpful with, without creating yet another foreign bureaucratic behemoth of corrupt NGOs, which has served local populations in Africa so poorly in the past. Providing education, inspiration, and rewarding local initiatives and local efforts will empower generations of future allies in Africa without having the US hopelessly in meshed in local conflicts, and endemically questionable confrontations with African governments.

Finally, the role of African terrorists groups in exporting terrorism to Europe and other places around the world demonstrates the truly international nature of the conflict being fought – the conflict that incorporates both a war of ideas (an aggressive revolutionary Islamist mindset), and a war of transnational alliances of odd bedfellows, which may have nothing in common ideologically, but are all too willing to cooperate on pragmatic level with respect to arms trade, and assorted criminal financing methods for their enterprises.

That the same drugs are making their way into the United States, that the same people are involved in propaganda that radicalizes disaffected Americans, that the same people are behind human trafficking into the United States is no longer a question. And that the same foreign imams that travel from Pakistan, Egypt, or Saudi Arabia to Morocco to sow their hatred in contradiction to local norms and customs, and then somehow make their way to Europe and American mosques largely run by Islamists is likewise a legitimate and serious concern. Perhaps, then, it’s time to start learning from countries like Morocco, which have already identified this problem and are successfully dealing with it, and start adopting and adapting their methods of counterterrorism to the United States.