You are here: Home / Analysis / Why US troops are in Niger? 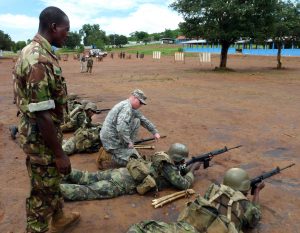 The back and forth about President Donald Trump‘s condolence calls to the families of four fallen American soldiers in Niger has raised questions about the U.S. military presence in the West African country, like reported by abcnews.go.com.

Here are some answers to questions you might have about the U.S. military presence in Niger, West Africa, and the circumstances about the incident that killed the four U.S. soldiers and wounded two others. Wondering why there are Army Green Berets in Niger? They are there as part of a counterterrorism mission to train Niger’s military to help fight Islamic extremists in neighboring countries, namely Mali.

When did US forces arrive in Niger? They arrived in early 2013 to help the French military that had intervened in neighboring Mali the year before. The French had moved into Mali after an Al Qaeda affiliated group and tribal groups took over the vast northern part of the country and were moving toward the capital of Mali. As part of the U.S. effort to assist that mission then-President Barack Obama ordered 150 U.S. military personnel to set up a surveillance drone operation over Mali that would fly from Niger’s capital of Niamey.

How many U.S. troops are there in Niger? About 800, but the vast majority of them are construction crews working to build up a second drone base in Niger’s northern desert. The rest run a surveillance drone mission from Niger’s capital of Niamey that helps out the French in Mali and other regional countries in the fight against Al Qaeda, Boko Haram and now ISIS. A smaller component, less than a hundred, are Army Green Beret units advising and assisting Niger’s military to build up their fighting capability to counter Al Qaeda and ISIS. There are an additional 300 U.S. military personnel in neighboring Burkina Faso and Cameroon doing the same thing. They are there as part of what’s known as the mission in the Lake Chad Basin.

What does that Green Beret mission mean? Green Berets are elite Army soldiers who are highly skilled and trained to operate on their own with few resources in remote areas. One of their primary missions is to train foreign militaries in fighting skills; that’s a worldwide mission. Iraq and Afghanistan have been the exception where large-scale training of the local militaries has been carried out by regular U.S. Army and Marine troops.

What was their mission/patrol when attacked two weeks ago? There is still a lot of confusion about what happened on Oct. 4. One narrative describes a team of about 12 soldiers from a Green Beret unit accompanying 40 Nigerien soldiers to meet with locals at a village close to Niger’s border with Mali. They had driven to a local village and were walking to or from the meeting when they were ambushed by about 50 fighters from ISIS in the Greater Sahara. Another version of events indicates a team of eight to 12 American and Nigerien forces conducted the meeting in the village and were the ones that came under attack. The Nigerien platoon was nearby but not a direct part of the mission to the village nor was it involved in the firefight. Pentagon officials have said Army Special Forces have carried out 29 previous missions like this one over the past six months without encountering any problems.

Why were there so few Green Berets on patrol with Niger soldiers when they came under attack? Green Berets typically operate in 12-man teams known as ODAs (Operational Detachment Alpha). Not all of the soldiers on this patrol were actual Green Berets; they were a mix of Green Berets and support staff attached to the Green Beret unit.

Why was a soldier missing for more than a day following the firefight? The ambush occurred in a remote area along Niger’s border with Mali. Nigerien troops had the lead on the ground and a day later found the remains of Sgt. La David Johnson, 25, in the vicinity of the firefight. Johnson had gone missing in the immediate aftermath of the firefight. A large scale effort was conducted by U.S., French and Nigerien forces to find him. The firefight was apparently a fluid battle scene that extended over a large area and wasn’t localized in one area. That is why the remains were found at the scene of the battle but possibly not at the site where the ambush initially happened.

Why didn’t the Green Berets have overhead drone surveillance for their patrol? A question that’s been asked is why the mission did not have a drone overhead to provide reconnaissance. A U.S. Africa Command spokesman said last week that the ambush was not expected and if it had been anticipated “more resources would have been dedicated to it to reduce risk.” French military aircraft arrived a half hour after the ambush began and provided combat air support though it did not drop bombs or missiles.

What about the Golden Hour to evacuate combat wounded to medical treatment?The different branches of the U.S. military operate all over the world either in joint training missions, unilateral combat operations or military exchanges. The Pentagon takes the Golden Hour seriously and strive to meet what is essentially a goal, but not a requirement. Given there are U.S. troops worldwide, American helicopters and planes can’t be everywhere. On this patrol, French military helicopters responded shortly after the attack and a U.S. reconnaissance drone was overhead a half hour after the attack. It’s likely that French helicopters evacuated the wounded to Niamey and a U.S. military aircraft flew the wounded to a military medical facility in Germany.