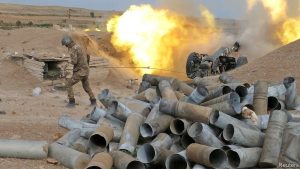 A month of fighting has taken place between Armenia and Azerbaijan, leaving cities smoldering and thousands of civilians forced to flee, and thousands of soldiers killed and wounded, with regional countries benefiting from the suffering, like reported by jp.com. The war against Armenia was fueled by Turkey which supplied drones, sent Syrian extremist mercenaries and encouraged Baku to attack Armenian forces in Nagorna-Karabkah in September. A month later Azerbaijan has been slowly pushing back Armenian fighters in a grinding war.

On October 25 US President Donald Trump congratulated Azerbaijan President Ilham Aliyev and Armenia’s Prime Minister Nikol Pashinyan on a ceasefire agreement. It was brokered after US Deputy Secretary of State Stephen Biegun had met with his Armenian and Azerbaijan counterparts. It is not clear if the latest agreement will hold or if it is only temporary for humanitarian reasons.

Turkey continues to push for more fighting. Turkish media, which is entirely pro-government and does not permit criticism of Ankara’s leadership, daily has splashy headlines encouraging people to cheer the war. Anadolu, for instance, has a section of the homepage where one can experience the “frontline” along with numerous stories about how Armenia has committed “war crimes” and Armenia violated a “ceasefire” and then stories about Ankara offering military support to Azerbaijan. Turkish media makes it clear that the war against Armenia is a Turkish war, all about making Ankara dominate the region and sell its drones abroad.

Turkish media makes clear the government’s role in the conflict through reports that the Kurdistan Workers Party (PKK) is operating in Armenia, a totally invented story with no evidence which is part of how Ankara’s media repeatedly invents stories of “PKK terrorists” operating in areas Turkey wants to invade. Turkey has claimed the “PKK” operates from Sinjar in Iraq and Syria, even though there have been no “terrorist” attacks on Turkey from these areas. In 2018 Turkey claimed it had to invade and ethnically cleanse Afrin in Syria, expelling Kurds and minorities, destroying churches and Yazidi graveyards, to fight “PKK terrorists.” It created the same rhetoric to justify war against Armenia.

Iran and Russia have also benefited from the fighting by being made to appear as responsible countries pushing for a ceasefire. While Turkey pushes tensions, these two countries claim they want the fighting to end but that they also want international law observed. Azerbaijan claims that Nagorna-Karabakh is its territory based on international law. While that same law would not justify war to attack the area, Azerbaijan receives support from Moscow and Tehran on this point. They want mediation, whereas Ankara was conflict. Overall the three countries already worked to partition Syria into spheres of influence and Russia and Turkey have also partitioned Libya into spheres of influence, which means the conflict between Azerbaijan and Armenia is not a conflict between these regional powers, but one in which they manage the conflict together and economically they benefit because both sides buy their arms to continue fighting.

The fighting so far has destroyed a massive amount of Armenian material. Drones have been key to revolutionizing Azerbaijan’s war effort. Baku has used precision strikes to make tanks and artillery appear obsolete. They have also used drones to hunt down air defense systems of Armenia. More than 100 Armenian T-72 tanks have been destroyed according to videos and dozens of other vehicles have been destroyed. Armenia also claims hundreds of Azerbaijan vehicles and drones have been downed. It is impossible to confirm the Armenian claims because there are few videos as evidence. Baku puts out videos almost daily of drones striking vehicles. It is believed around 1,000 Armenian soldiers have been killed in fighting.

Most of the fighting is done within the areas around Nagorna-Karabkah, especially near the Iranian border. This means that Armenia and Azerbaijan are not directly at war but that Baku is technically only fight the Artsakh Armenian republic in Nagorna-Karabkah. Azerbaijan was careful not to expand the war into the rest of Armenia. However Armenian rockets have fallen on Azerbaijan cities, leading to claims of war crimes. Similarly an execution video of two Armenians being killed have led to complains of Azerbaijan war crimes. Both sides have shelled civilian towns and cities. Turkey has sent extremists from Syria to fight Armenians, part of Ankara’s pro-Islamist zeal that exports extremists to fight against minorities and terrorize Christians. This appears to have led the US embassy in Baku to warn about terrorism.

Azerbaijan is making steady progress on its frontlines. Russia helped broker a ceasefire on October 10 that was immediately violated. Russia has tried this mediation since fighting in July and had hosted meetings in September. Azerbaijan has ruled out concessions, sensing it has the upper hand. Russia and the US had urged a ceasefire since September 28 but the US refused to play much of a role. Armenian protests across the world have tried to pressure France, Canada, the US and others to stop the conflict and stop arms sales to Turkey. Many countries, like Germany, appear to prefer the arms sales over mediating conflicts like this one. This has enabled the conflict to continue.

Iran has been concerned about destabilization on its border, sending troops and armored vehicles and saying that the conflict could spill over if everyone is not careful. Although Russia appeared like it might push a second ceasefire mediation on October 21 it was left to the US to help broker the new ceasefire on October 25. It is believed half of the people in Armenian-controlled Nagorna-Karabkah have fled fighting. Some 75,000 have fled in some areas, according to reports. Azerbaijanis are being encouraged to return to areas that they claim. The US has expressed concern about shelling of the Ghazanchetsots Cathedral in Nagorna-Karabkah. The US refused to name Azerbaijan as the culprit, although Armenians said Azerbaijan shelled the site. After Baku’s gains it is unclear if the country will stop the conflict a this stage. It has achieved gains, but it likely wants to show it has “liberated” more to justify the conflict. Turkey, having exported Syrian extremists, many of them known for ethnic-cleansing of Kurds and brutal attacks on minorities such as Christians and Yazidis, will want to keep the Syrians in Azerbaijan so Turkey can have a permanent occupation of Nagorna-Karabakh. This is Ankara’s model in Cyprus, Libya, Syria and Iraq. There will likely be an expanding Turkish presence now in Azerbaijan and Ankara will try to prod Azerbaijan into more conflicts.

US global leadership suffered another loss in the conflict as the US showed that for a month it could achieve little and didn’t bother sending high level diplomats. This is part of the Trump strategy of “America first” and not dealing with what he calls “far away places.” This is a major departure from the rules-based international order envisioned in the 1990s when the US was a global hegemon. Today Turkey, Iran, Russia and China help determine more regional and global affairs as the US has retreated from dealing with foreign conflicts and what many see as “endless wars.” This has led to unprecedented levels of new conflicts, many of them fueled by countries like Turkey that prod others to use a “might makes right” approach to foreign policy.

The war in Armenia and Azerbaijan was part of that. Frozen since the 1990s, Baku claims that the international community failed to help it get back territories. It tried various processes, such as the “Madrid Principles” and “Minsk Group” talks. Since the international community and its various discussions have tended to fail to end conflicts like the one in Syria many countries see the Iranian, Russian, China and Turkish approach as more appropriate than waiting for the EU, NATO, UN or US to do anything. The people of Ganja and Stepanakert, under shelling during the recent war, have paid the price.