You are here: Home / Analysis / Why Turkey hired Syrians to fight for Azerbaijan? 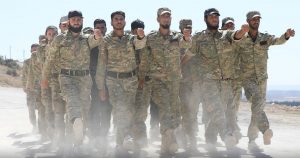 The recent hostilities between Azerbaijan and Armenia over their contested region of Nagorno-Karabkh has become an international event, with Turkey putting its weight behind Baku as Yerevan tacitly held to its understanding with Russia, which guarantees its security via the Collective Security Treaty Organisation (CSTO). However, the nature of geo-politics, specifically in the Middle East, has seemingly rubbed off in Central Asia as well with foreign fighters, allegedly ‘hired’ by Turkey via private contractors to work as ‘border guards’ arriving in Azerbaijan to add a significant backline for the Azeri military, like reported by eurasiareview.com.

Firstly, the Nagorno-Karabakh crisis is a very interesting study in modern movements of geo-politics itself, which is important to understand why some states would spend money to arm other states, without attempting to get directly involved via their sovereign militaries. In the Azeri – Armenian divide, the Azeris, who are more than 80% Shias, are being backed by Turkey, a Sunni-Islam state, while Iran is alleged also supporting Armenia, a majority Christian nation, while being the seat of Shia power. This ongoing theatre offers an interesting glimpse on the role of strategic and tactical aims vis-à-vis interests, the latter having much stronger resonance in foreign policy, specifically when viewed from a long-term perspective.

The protection of ‘interests’ that may be difficult to define around the ideations of a modern nation state often forces governments to resort to parallel, or ‘proxy’ warfare, not getting directly involved in military confrontation but fighting a geo-political tussle indirectly, at times on a third party’s soil. However, since 1964, when noted political scientist Karl Deutsch defined proxy warfare as ‘an international conflict between two foreign powers, fought out on the soil of a third country; disguised as a conflict over the internal issue of that country; and using some of that country’s manpower, resources as a means of achieving preponderantly foreign goals and foreign strategies,’ things have changed drastically. While the nature of conflict shifted in the post-WWII era, state-administered armed forces remained the prominent fighting outfits. This diluted further as geopolitics and warfare changed in the post-Soviet era of the 1990s, with rampant globalisation, technological advancements and so on adding newer layers and challenges. This was perhaps most publicly displayed by the multiple controversies in the mid-2000s around the security company Blackwater, run by American businessman and former US Navy SEAL Erik Prince, who privatised many parts of the US war in Iraq following 9/11, overtly showcasing perhaps for the first time the most crass form of market-acceptable profiteering from a conflict (Prince is still active, now trying to work with China).

Scholar Peter W. Singer adds to this thinking, highlighting three dynamics that led to the rise of a ‘private military industry’, the end of the Cold War, transformation of warfare blurring lines between soldiers and civilians and general trends towards privatization and outsourcing of government functions. Singer explains in his research how these changes rose within the American military establishments. However, a lot of these ideologies of warfare were also internalised by various other states in environments more fertile in conflict, such as the Middle East.

The Syrian civil war, raging as an endless spiral since late 2010, has seen the above-mentioned strategies playout in various formats. From the so-called Islamic State’s (ISIS) official rise in 2014, relying on incoming foreign fighters for technological and combat expertise and leadership, to Iran’s Fatemiyoun Brigade which comprises of young Afghan men who saw combat in places such as Aleppo, Hama, Deir Ezzor, Homs and so on in Syria against ISIS and other factions. This allowed Iran’s infamous Islamic Revolutionary Guard Corps (IRGC) to keep Iranian casualties in the Syrian war low, while the country went through economic crisis due to sanctions and a probing population over the money being spent on wars beyond its borders. It does not all end only in Syria, in Libya, in northern Africa, Russia deployed mercenaries of the Wagner Group to support the renegade general Khalifa Haftar’s battle against the government in Tripoli. In response, once again, an overreaching Turkey is accused of sending fighters from Syria to help prop-up the Libyan government against Haftar, who is backed by Russia and the UAE.

Fighters from Syria are an amalgamation of circumstances and ground realities. Many who are finding their way into other conflict theatres such as Libya or now Azerbaijan don’t necessarily come from same backgrounds of militants, militias, Islamists and so on. While the ones fighting on Turkey’s behalf in Libya most likely are hardened militias who see Turkish President Recep Erdogan’s self-styled Sunni-power leader image as palatable, and do so in support of Ankara’s regional geopolitical manoeuvres, the ones in Azerbaijan, reportedly hired by private contractors, are those who suffer from economic destitution back home, and see this as merely a job that pays. The videos and images posted on social media of Syrian fighters killed in Nagorno-Karabakh have been traced back in some cases to men belonging to normal families without any history of being aligned with terror groups. However, the lure of a good pay day to fight for a second country on a third country’s land, perhaps has been far too inviting to ignore for many Syrians. In theory, this is the same model employed by the Fatemiyoun Brigade, with Afghan men taken to Iran, and then flown to Syria to fight for Tehran. This model has over the past few years become more visible, and viable for states such as Russia, Iran and Turkey.

For Turkey, emboldened by a leadership such as that of Erdogan who has managed to create problems on almost all sides of the Turkish borders with an expanding military reach ranging from Libya to the Mediterranean Sea, with friction with the likes of Greece, and by association the European Union, the US despite being a NATO ally and active military presence and geographic hold in northern Syria, ‘outsourcing’ conflicts becomes an economically viable option. During the internal GCC feud between Saudi Arabia, UAE and Qatar, Erdogan deployed military assets to Doha, signal further entrenchment of Turkish military as part of its foreign policy. However, ultimately, all of this is bogged down by the limitations of a relatively timid Turkish economy, specifically during the Covid-19 era.

Another country where these kinds of ‘contract’ private entities could be deployed in the near future is Afghanistan, as the US hurries its withdrawal, leaving behind significant security vacuums. The private sector has not shied away from filling in such gaps in the past, and these private sector capabilities go much beyond just security guards on the borders. Iraq remains a prime example of the same, with companies that have nothing to do with the defence industry also seeing an opportunity to make a buck. For example, the American energy company Halliburton also won multiple contracts by the British and American military to transport troops to Afghanistan, amongst other operations in the mid-2000s despite defence not being its primary business in public discourse.

Unresolved crisis points such as Syria, Yemen, Iraq, and proxy conflicts enabled by the likes of Iran and the Gulf states are creating a micro-economy of fighters that are able and willing to fight in return for economic benefits. This largely comes from years of economic collapse of entire states, and not necessarily from Islamist terror groups and radicalisation. However, like private contractors, Islamist groups also employ similar tactics to retain a fighting force.

The international community should pay adequate attention to these trends of unchecked private militias for hire, that are deployed with much ease today to regional theatres, such as Nagorno-Karabkh today. The fact that Turkey was able to ‘hire’ and airlift third party fighters and only provide them air cover via a minimal deployment has a strong two-front tactical and strategic success at play, the first being purely military, and the second and perhaps more importantly being not inciting domestic politics against a leadership by starting conflicts in foreign lands and deploying own troops with the eventuality of casualties. Turkey’s overtures in Nagorno-Karabkh got support from the likes of Pakistan as well, where social media handles praised and supported Erdogan’s moves in favour of Baku. Islamabad’s own experiences and support for proxy warfare is well known world over.

International multilateral institutions should take these trends of outward-going foreign fighters from Syria as events that need urgent attention and develop international laws to check countries looking to exploit conditions of civil war even further for their strategic benefit. Like there are institutions against nuclear proliferation, chemical weapons and so on, such use of foreign citizens as war-time products should have an equitable global response both for safeguard of localised regional communities in conflict and the global security architecture at the same time.