You are here: Home / MidEastGulf / Why Saudis hate Iran? These are the reasons… 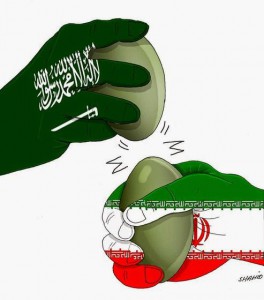 Everyone knows that the Saudi Arabia – the center of Sunni Islam – hates Iran because it is the center for the rival Shia Muslim sect.

The Saudis – close U.S. allies – also hate Iran because it is allied with Russia.

But there is a third, little-known reason why the Saudi government hates Iran.

As the Gulf Cooperation Council – the official council for the Arab Gulf States, comprised of the monarchies of Saudi Arabi, Kuwait, Bahrain, the United Arab Emirates, Qatar and Oman – writes:

More than any other single factor, the Iranian Revolution helped to coalesce the security concerns of Saudi Arabia and the other monarchies in the Gulf region. As the largest Arab monarchy, Saudi Arabia was in a position to lead the others toward cooperative efforts. The impact of the Iranian Revolution on Saudi Arabia was manifold. The revolution destroyed the most powerful monarchy in the Gulf area. It was the second revolution to send shock waves throughout the Gulf region, the first being the revolution in Iraq that destroyed the monarchy in 1958. The Iraqi revolution had been followed by deteriorating relations between Riyadh and Baghdad, when the Baathist regime tried to subvert the Gulf monarchies. The Iranian example, however, appeared more menacing. The balance of forces seemed to have changed further against the monarchical regimes in the region because Iran, like Iraq, replaced the monarchy with a republic. Whatever course the new Iranian republic took, its very existence would threaten Saudi Arabia and other Gulf monarchies.

In other words, the Saudi government hates Iran because it is a republic, while Saudi Arabia and the other Gulf states are monarchies.

Indeed, Vijay Prashad – Professor of South Asian History at Trinity College, Connecticut – said that the Saudis want to crush Iran so that it cannot set an example showing that Muslims can live in a republic without a monarchy.

Prashad points out that the “Saudis made claim that a Muslim country has to be a monarchy”, and Iran’s very existence undermines that claim.

Why does the U.S. support Saudi Arabia and not Iran?

As Lawrence Davidson – author of Islamic Fundamentalism, and professor of history at West Chester University – explains:

Saudi Arabia is a monarchy without representative institutions. Iran, though ideologically authoritarian and possessing the dictatorial office of jurisprudent, is a republic with a parliament and an electoral process. Saudi Arabia strictly forbids female participation in the public realm, whereas Iran leaves some space for women in this regard.

Given these comparisons, it would seem that, in terms of institutions and their potential for “democratic evolution,” the Islamic Republic in Iran has much more to recommend it to the West than does Saudi Arabia.  Why then, one might ask, is the United States so much more hostile to Iran than to Saudi Arabia?

For decades, the United States supported the shah’s monarchy in Iran and continued to do so even after it was clear that it was unpopular, corrupt, and oppressive. When the shah was overthrown, the fundamentalists who took power identified the United States with the deposed government. The new Iranian government’s predictable hostility made difficult any reconciliation between the two powers and fueled continued American animosity.

Indeed, the U.S. supports virtually all of the dictatorial monarchies in the Arab Gulf.

And, of course, there is oil and pipelines play a big part.

Postscript: By way of background, the CIA admits that the U.S. overthrew the moderate, suit-and-tie-wearing, Democratically-elected prime minister of Iran in 1953. He was overthrown because he hadnationalized Iran’s oil, which had previously been controlled by BP and other Western oil companies. As part of that action, the CIA admits that it hired Iranians to pose as Communists and stage bombings in Iran in order to turn the country against its prime minister.

If the U.S. hadn’t overthrown the moderate Iranian government, the fundamentalist Mullahs would have never taken over. (Moreover, the U.S. has had a large hand in strengthening radical Islam in the Middle East by supporting radicals to fight the Soviets and others).