You are here: Home / Africa / Why Obama’s military deployment against Boko Haram is too little, too late 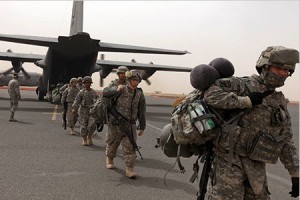 Cameroon was once Central Africa’s oasis of peace and stability. But since 2012, it has faced terrorist attacks, abductions, kidnappings, and incursions largely initiated by Boko Haram, an Islamic extremist group based in Nigeria.

Boko Haram has evolved from a local terrorist group to a regional and global security threat. Involved in low-level conflicts since its creation in 2002, Boko Haram intensified assaults against the Nigerian state in 2009, when it launched a series of attacks against police forces in Bauchi and then in Borno, Yobe, and Kano. Since then, Boko Haram has increased its frequency of terror attacks in Nigeria, pledged allegiance to the Islamic State, and expanded geographically to launching attacks in other West and Central African countries, such as Cameroon, Chad, and Niger. Boko Haram has killed at least 15,000 people and displaced 2.1 million in Nigeria alone. In 2013, the U.S. House of Representatives Committee on Homeland Security warned against underestimating Boko Haram’s willingness and capacity to attack the United States.

While Nigeria, Cameroon, Chad, Benin, and Niger have been collaborating to fight the terrorist group, Boko Haram’s attacks have continued to escalate. Last year, the wife of Cameroon’s Deputy Prime Minister Amadou Ali was kidnapped, and freed only after Boko Haram received a monetary ransom, arms and ammunitions from the Cameroonian government.

This year, between April and September 2015, 106 Boko Haram attacks were reported in the far north region of Cameroon — up to four attacks per week some months. The kinds of attacks were varied and included kidnapping, suicide bombing, assassination, robberies, extortions, burning villages and schools, and attacks of police stations and military positions. On Oct. 9, at least 11 people were killed and more than 29 injured in a twin suicide bomb attack in Kangaleri, a village in the far north of Cameroon.

On Oct. 14, President Obama declared the deployment of approximately 300 U.S. Armed Forces personnel to Cameroon to perform intelligence, surveillance and reconnaissance operations. These troops (and military equipment) will support the Multinational Joint Task Force (MNJTF), under the command of Nigerian Maj. Gen. Iliya Abbah. The MNJTF has 8,500 soldiers and 2,000 police officers that hail from Nigeria, Chad, Cameroon, Niger, and Benin.

While some in West and Central Africa welcome Obama’s action, it’s too little, too late. Security expert Michel Rubin considers dissuasive military tactics as the “best means to counter terrorist threats.” The U.S. deployment focuses on intelligence, stopping short of supporting preemptive strikes or more direct and special operations. At its current level, the U.S. troop and equipment contribution will not provide sufficient military force to eradicate Boko Haram.

The U.S. support is also coming rather late in the game. The U.S. commitment of troops in Cameroon came only after China, Russia, Germany and France had already committed to help Cameroon, through defense cooperation agreements (Russia) and by providing sophisticated military equipment (China, Germany) and training for security forces (Russia, Britain, France, and the United States).

Some civil society leaders and local analysts have raised concerns that an intervention would be destabilizing. They perceive U.S. support as a proxy for competing with Russia specifically and opportunistic geopolitical positioning more broadly. Cameroon has “a pivotal geographic position” in the Gulf of Guinea, an oil-rich region that includes Angola, Chad, Congo Republic, Congo, Equatorial Guinea, Gabon, Sao Tome and Principe, and Nigeria.

The timing of U.S. announcements about action against Boko Haram furthers Cameroonian skepticism about U.S. motivations, especially with respect to U.S. competition with Russia. For example, U.S. interest in helping Cameroon with anti-Boko Haram efforts increased in December 2014 after Nigeria canceled a U.S. military training exercise related to the fight against Boko Haram and turned to Russia for military equipment. Shortly thereafter, the head of the U.S. Africa Command (AFRICOM) Gen. David Rodriguez announced that the United States would provide military equipment and logistic training. Obama’s recent announcement to deploy soldiers fulfills that promise.

Boko Haram’s attacks in Cameroon continue in the wake of Obama’s announcement. On Oct. 23, Boko Haram briefly seized control of Kerawa, another city in the far north of Cameroon. While some remain hopeful that the U.S. commitment of troops will be an “immense help,” only time will tell.