You are here: Home / Analysis / Why Jihadis are becoming Turkey’s permanent proxy force 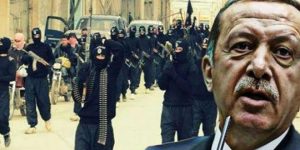 An assortment of jihadi groups holed up in northern Syria under Turkey’s protection are becoming the permanent proxy force of the new Ottomans, like reported by algemeiner.com.

This looks like a marriage made in heaven. Turkey and the jihadis share an ideological and sectarian bond and have common goals. There is money and logistical support, as well as geographical proximity. They share a taste for adventurism in faraway lands, particularly in the service of what they consider a holy cause.

The 27th report of the Analytical Support and Sanctions Monitoring Team submitted to the UN Security Council (UNSC) concerning ISIL (Islamic State), al-Qaeda, and associated individuals and entities, concludes that Iraq and Syria remain the core area for ISIL, with the Idlib area, where al-Qaeda also has affiliates, a particular source of concern.

”The Idlib area” refers to Syria’s northwestern tip neighboring Turkey, the last rebel stronghold in the war-torn country. Idlib has become a de facto Turkish province. The Turkish lira is the medium of exchange, and Turkish government agencies provide services like education, housing, and preserving public safety. Since early 2020, the Turkish military has been controlling the area under the pretext of protecting Turkish observation posts from a Syrian military offensive and creating a safe zone for displaced persons.

The Idlib de-escalation zone remains important to ISIL as a limited safe haven. Hay’at Tahrir al-Sham (HTS) regularly arrests ISIL fighters. However, some ISIL leaders continue to reside in the region and it is a target destination for many former ISIL fighters and families as the safest gateway into Turkey.

HTS is still the dominant militant group in the northwest of the Syrian Arab Republic, with approximately 10,000 fighters, most of them Syrian. HTS seeks further to consolidate its control of the Idlib de-escalation zone and applies pressure on local leaders to accept the group’s authority, ensuring that the population complies with its version of sharia law.

In addition to taxation of local businesses, HTS maintains a monopoly over the import and distribution of gasoline and diesel fuel…The group’s earnings from trading fuel and energy are estimated at approximately $1 million monthly. HTS is also reported to control distribution of humanitarian aid through an entity known as Maktab Sho’oun Al-Munathamat (the Bureau of Organization Affairs), which limits direct distribution of goods to the local population by humanitarian organizations. It also confiscates portions of these goods to reinforce HTS patronage networks.

The other major Al-Qaeda affiliate in the Idlib area is Hurras al-Din (HAD), with between 2,000 and 2,500 fighters. It was weakened by a significant number of leadership losses in 2020 and is overshadowed by HTS, with which it competes for recruits and reputation among the local population.

The Idlib area continues to harbour other terrorist groups composed mainly of contingents of foreign terrorist fighters who remain subject to the authority of HTS. These groups include the Khattab Al-Shishani Brigade (Chechen fighters), Katiba al-Tawhid wal-Jihad (KTJ, Central Asian fighters) and the Eastern Turkistan Islamic Movement (ETIM), also known as the Turkistan Islamic Party. The latter is reportedly composed of 3,000 to 4,500 members.

That was Idlib at the end of 2020. The umbrella militant group for the jihadi groups is the Free Syrian Army (FSA), Turkey’s official ally and combat force in Syria, which in 2019 reflagged itself as the Syrian National Army (SNA). The SNA has been trained and equipped by the Turkish military since 2016.

Turkish loyalists of Sunni Arab origin have been accused of wreaking havoc in northern Syria, displacing hundreds of thousands, and committing alleged war crimes on a daily basis. The Ankara-commanded proxy militias bear most of the blame for many of the reported atrocities that have affected local Kurds, including executions, kidnappings, rapes, looting, and other crimes.

Apparently, the self-styled SNA, FSA’s new brand of jihadists, followed suit. According to an October 15, 2019 report, Turkey’s extremist proxies “vowed to kill ‘pigs’ and ‘infidels,’ paraded their Kurdish captives in front of cameras and, in one graphic video, fired several rounds into a man lying on the side of a highway with his hands bound behind his back.”

With over 200,000 displaced according to UN figures, many refugees are claiming that the Turkish forces are planning to flush the Kurds out of the settlements and replace them with Arabs loyal to Ankara. They have also been fighting Syrian Kurdish militias, Turkey’s principal military target. That’s unusual notoriety for the proxy ally of a NATO member state.

According to a December 31, 2012, article in The Huffington Post:

[The FSA] has in the recent past stolen wheat reserves intended for the residents of Aleppo and sold it to private Turkish grain traders, expropriated stocks of pharmaceuticals and forcibly resold them back to its owners, and ransacked schools…

In the outskirts of Aleppo, the FSA has implemented a Sharia law enforcement police force that is a replica of the Wahhabi police in Saudi Arabia—forcing ordinary citizens to abide by the Sharia code…

Lebanese newspapers such as Al-Akhbar and Assafir, and Alex Jones’ infowars.com, have broadcast a disturbing video of a 12-year-old child apparently forced by the FSA to cut off the head of a Syrian military officer…

The FSA has also been targeting the infrastructure of the country. One of the main power plants in Damascus was knocked out for three days last week, impacting 40 percent of the city’s residents.

Amnesty International compiled evidence of war crimes committed by Turkish forces and Turkish-backed Syrian armed groups during the offensive. It reports, based on witness testimony from October 12-16, 2019, on “how Turkish forces have displayed a disregard for civilian life, including through summary killings and unlawful attacks that have killed and injured civilians…The information provides damning evidence of indiscriminate attacks in residential areas—including attacks on a home, a bakery and a school—carried out by Turkey and allied Syrian armed groups.”

As Turkey’s neo-Ottoman ambitions pushed the country into Libya’s civil war, Ankara deployed its semi-official proxy army into that new war zone. According to the Pentagon’s inspector general, Turkey sent between 3,500 and 3,800 paid Syrian fighters to Libya over the first three months of 2020. That was the Defense Department’s first report detailing Turkish deployments that aimed to change the course of Libya’s war. The quarterly report on counter-terrorism operations in Africa by the Pentagon’s internal watchdog said Turkey paid and offered citizenship to thousands of mercenaries fighting alongside Tripoli-based militias against troops of east Libya-based commander Khalifa Hafter.

Later in 2020, Turkey would deploy its jihadi allies in a conflict raging far from its own borders in a land many had barely heard of a few months earlier. In October, the bodies of more than 50 Syrians killed in the Azeri-Armenian war were returned home for funeral preparations. They were members of militias that had fought on Turkey’s behalf in the disputed enclave of Nagorno-Karabakh. Once again, President Erdogan was the first world leader to jump into the fray when a long-simmering conflict in the south Caucasus burst into open warfare. Turkey also supplied weapons, especially armed drones, as well as training to Azerbaijan.

According to a report by Observer Research Foundation, fighters from Syria are an amalgamation of circumstances and ground realities.

“Many who are finding their way into other conflict theaters such as Libya or now Azerbaijan don’t necessarily come from the same backgrounds of militants, militias, Islamists and so on. While the ones fighting on Turkey’s behalf in Libya most likely are hardened militias who see Turkish President Recep Erdogan’s self-styled Sunni-power leader image as palatable, and do so in support of Ankara’s regional geopolitical maneuvers,” the report said. But the fighters in Azerbaijan, reportedly hired by private contractors, were largely people who suffered economic destitution back home and saw the alien war theater as a paying job.

“Despite the time it took and the cost that Turkey has incurred, decision makers in Ankara have grown increasingly amenable to the use of proxies, prompting a change in psychology and perception that represents a significant departure from Turkey’s historic policy of relying on conventional forces,” said Osman Sert, research director at the Ankara Institute. “Proxies are now perceived as being a critical component of Turkey’s regional security interests, and no longer simply a measure that could be indirectly operationalized through other proxy sponsors in the region.”