You are here: Home / Analysis / Why Islamic State surge in Maldives? 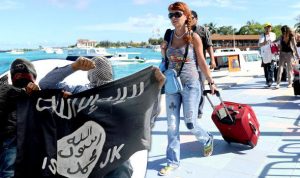 On April 21, 2020, unidentified attackers set ablaze a sewerage pump station operated by state owned utilities firm, Fenaka Corporation, on the Hithadhoo Island of Addu City. Though the fire was extinguished and no one was hurt in the incident, Mayor Abdulla Sodiq in a Tweet alleged that it was an attempt to halt services on the island, reported by eurasiareview.com.

Though no one has claimed responsibility for the attack, the Islamic State, in an article published on April 21, 2020, in its magazine Voice of Hind, stated, “We also congratulate the brothers from Maldives for carrying out the blessed arson attack against the apostate regime…”

The article referred to a similar attack of arson on April 15.

On April 15, 2020, five speedboats, including a sea ambulance, a police vessel and the atoll council’s speed boat, were damaged in a fire at Mahibadhoo Harbour on the Alifu Dhaalu Atoll. Two other speed boats and two dinghies were also affected by the fire.

The same evening, Maldives Police Service (MPS) classified the incident as a deliberate act of arson to retaliate against the ongoing investigations against religious extremism and drug trafficking.

On April 17, 2020, the Islamic State (IS, Daesh), via its weekly newsletter Al Naba,claimed responsibility for setting ablaze five “Naval boats” at Mahibadhoo in Alifu Dhaalu Atoll on April 15. The IS release further claimed that the boats, which belonged to “Murtad (Apostate) Maldivian Government and sponsors of Kufr (infidel)Democracy” were destroyed using “incendiary bombs”.

The claim also importantly remarked: ”the police…hinted at similar attacks in the past targeting boats and property of apostate government” seemingly to imply ISIS fighters were behind the March 22 arson attack on police boat in Gan.

In an uncanny coincidence, on March 23, 2020, SITE INTELLIGENCE Group, an organisation that monitors online activities of extremist groups, disclosed that an IS aligned Maldivian channel had urged followers to engineer attacks during the COVID-19 crisis.

The recent IS-linked incidents are the product of the toxic brew with key components of puritanical Salafism (replacing the heterodox religious tradition of the island nation) and religion-based political mobilisation, combined with increasing digital connectivity. The Maldives contributed the highest IS fighters per capita in the Syrian civil war. On December 16, 2019, Commissioner of Police (CP) Mohamed Hameed disclosed that there were approximately 1,400 extremists in Maldives, who followed the Daesh ideology and who would not hesitate to kill their fellow men to defend their beliefs. Hameed further stated that 432 Maldivians from across the island nation sought to take part in the Syrian conflict and attempted to travel or travelled to the warzone.

Since January 1, 2018, when the South Asia Terrorism Portal (SATP) stared compiling data on terrorism in Maldives, the IS or individuals inspired by the IS have carried out a total of six attacks (data till April 24, 2020). The first incident was recorded in December 2019 (date not known). In the incident, unidentified assailants attacked a Turkish tourist. No other incident was recorded in 2019. Five incidents have already occurred in 2020 (data till April 26).

These six attacks include two incidents of attack on foreign nationals by locals inspired by IS:

February 4, 2020: Extremists, suspected to be inspired by the IS, stabbed and injured three foreign nationals – two Chinese and one Australian – near Hulhumale Redbull Park Futsal Ground in the Hulhumale city of Kaffu Atoll.December 2019 (precise date not available): Extremists stabbed a Turkish national in Hulhumale city.

The April 22 article in Voice of Hind noted

…May Allah accept all your efforts and the operations you have executed such as the burning of a Hotel … and the stabbing of an Australian Kafir. Make it worse for the apostate democratic governments so that Allah punishes them by your hands…

The claim by IS uncovered another attack in the island nation. On March 21, 2020, an unexplained arson incident occurred at Villa number 47 in Cheval Blanc Randheli, a luxury hotel located in Noonu Atoll.

Daesh had planned to carry out its first attack in the Maldives in 2017. The plot to blow up an airline mid-air using an Improvised Explosive Device (IED) through an unnamed Maldivian operative was, however, foiled by Maldivian SFs along with the “five biggest countries in the world” (names not mentioned.

Meanwhile, SFs have arrested a total of 13 terrorists/radicals since January 2018, three in 2019, and 10 in 2020. The most prominent arrest was made by the Police on October 23, 2019, when they detained IS recruiter Mohamed Ameen. Ameen was also on the US Department of the Treasuries Office of Foreign Affairs Control (OFAC)’s published list of terrorists.

The extensive spread of COVID-19 has paralysed the functioning of nation states across the world, including the Maldives. In such a situation, where all the agencies of the government are busy fighting the pandemic, extremist groups like IS are trying to exploit underlying vulnerabilities. In the March 19, 2020, edition of Al Naba, an editorial titled “The Crusaders’ Worst Nightmare” exhorts supporters to show no mercy to the “infidels” and “apostates” in their moment of crisis, and instead to attack and weaken them, rendering them less able to harm Muslims; and to bear in mind that the calamity befalling the West and its allies “will substantially undercut their ability to wage war on the mujahideen in the coming period”.

Indeed, on April 15, 2020, Commissioner of Police Mohamed Hameed warned that the Security Forces (SFs) would not allow such groups to take advantage of the ongoing COVID-19 pandemic and the lockdown. Earlier, in the first week of April 2020, the Maldives National Defence Forces (MNDF) had also warned the extremists that the SFs could tackle both COVID-19 related responsibilities and security issues at the same time.

Nevertheless, there is a fear that the COVID-19 pandemic will give the cornered extremists present in the island nation same opportunities to exploit, as had the Tsunami in 2004. In a March 2020 National Counter Terrorism Centre (NCTC) Newsletter column, Lieutenant Colonel Ibrahim Naeem had thus observed,

Past instances in the Maldives include the exploitation of the public panic linked with Tsunami in December 2004 by extremist groups, with escalation of propagation of disinformation and increasing radicalisation efforts around Maldives. Now, IS-aligned Maldivian groups appear to be prepared to exploit the public fear associated with the Covid-19 pandemic. They have geared up their propaganda, manipulating online space with increased interaction within their online circles reaching individuals, who are otherwise hard to reach through traditional means, exposing them to a belief system that encourage use of violence against existing system, cultural norms and values, and disrupt the Maldivian way of life…

If the Islamist extremists inspired by Daesh are able to consolidate their foothold in the Maldives, this would add to the miseries of the island nation, severely denting its image as an exotic tourist destination. With tourism the country’s major earner, this would undermine the potential for economic recovery once the COVID-19 risk is gradually diluted. There is also a need for greater regional cooperation to deal with transnational terror groups like Daesh.