You are here: Home / Senza categoria / Why Islamic State is so good at branding its failures as successes

The Parsons Green attack shows that governments and media outlets keep falling into the propaganda traps being set for them, like reported by theatlantic.com 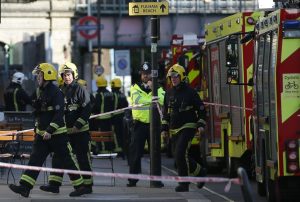 When you think about terrorist attacks the way the Islamic State does, even blatant technical failure can become strategic success. It’s all about how shrewdly you brand an attack after the fact—and how willing the media is to buy into your narrative.

Consider what happened in the U.K. on Friday. During morning rush hour, the London Underground’s District Line was brought to a standstill after a fireball erupted on a train at Parsons Green Station. Minutes after the Metropolitan Police arrived, news broke that the incident had been caused by a bomb—crudely concealed in a bucket and placed in a supermarket shopping bag—that had failed to detonate properly. Within a couple of hours, British Prime Minister Theresa May declared the incident an attempted terrorist attack.

At 8 o’clock that evening—about 12 hours after the bomb partly detonated—ISIS adopted the attack as one of its own, releasing a claim of responsibility through its official propaganda outlet, the Amaq News Agency. Minutes later, it released another statement—this time from its central media apparatus—giving further details on the attack and claiming, without substantiation, that “a number of bombs had been planted” and that that morning’s was just “one of them.”

In doing so, the group violated its usual protocol, in which it refrains from associating itself with bungled operations, or those where the attacker is still at large (the first exception to this rule was in the context of an attack in Brussels last month). However, it evidently decided that the opportunity cost of not claiming the Parsons Green operation was just too high. Its media officials had recognized that, without much effort, they could shift the discourse surrounding the attack and spin its failure into success.

They were not disappointed: After the statements emerged, perceptions regarding the operation were upended, and the British terrorism threat level, which is set by MI5, was raised from “severe” to “critical.” The focus was no longer on the failure of the bomb—that had become incidental at best. Instead, the key takeaway from the attack became the fact that ISIS was capable of hitting the U.K. for the fourth time in six months.

This is not the first time ISIS has deployed propaganda to steer popular discourse after an operation. Consider the way a handful of words transformed the likes of the Orlando shooter, the Sydney siege gunman, and other so-called “inspired” attackers from “ordinary” murderers of unarmed innocents into “soldiers of the caliphate.”

The dynamic this time was not dissimilar: Propaganda was deployed in order to supplement the communicative impact of Friday’s operation.

In view of this, we have to recognize that ISIS’s claims of responsibility are never “just” claims of responsibility. Rather, they are central parts of the terrorist deed, psychological addendums geared toward rigging popular perceptions that are, at times, more impactful than the operation itself. Understanding how these claims—which ISIS itself describes as “media projectiles”—impact a given attack is critical if we are to weather this storm.

First, we have to leave behind the myth of the binary outcome. In the context of this kind of narrative-led terrorism, operations do not simply succeed or fail based on their immediate effects. Rather, there is a sliding scale of success, and the number of casualties is just one metric. At least as important as the human impact is the communicative impact, the value of the attack as an act of “propaganda of the deed”—a tactic whereby operations are carried out precisely for the horror they instill in adversaries and the morale-boost they give to supporters. This is what, as an organization, ISIS really craves.

Denying terrorists communicative success is difficult to do, and requires much more than an effective policing or intelligence response. This is because any operation, provided it isn’t foiled prior to implementation, can easily be used to express and exaggerate attack capability and appetite.

It is for this reason that the Parsons Green bomber did not fail, even though his bomb did. He was launching an act of propaganda of the deed for ISIS, one geared toward garnering media notoriety for the caliphate. Even though his bomb did not kill anyone, let alone paralyze London—the Underground station it struck reopened later that evening—it had the desired effect. It reminded the world that ISIS was out to get it, and demonstrated to enemies and supporters alike that it was, at least to some extent, still capable of launching future attacks. That, simple though it is, is what success looks like.

As the caliphate continues to hemorrhage territory in Iraq and Syria, this kind of operation will become ever more important to the group. Its leaders know from almost two decades of booms and busts that propaganda of this sort will be the thing that keeps it going.

The response to the attack at Parsons Green signals that ISIS has lowered the bar for what constitutes an operation worth claiming, and this is not good news. It means that government spokespeople and media outlets alike must be more careful than ever not to fall into the propaganda traps being set for them. They must deny ISIS its ability to brand itself, and they must always remain two steps ahead, anticipating its propagandists’ next move. The full potency of ISIS’s propaganda of the deed strategy relies on the misguided responses of its adversaries. That its actions will provoke them is an essential component of its calculations, and an all-too-cyclical dynamic that we must deny it.

In the near future, as the caliphate shifts the focus of its appeal from territory to terrorism, we must expect more attacks like this—and know that next time, the attacks might not fail. In light of that, governments and media outlets must ready themselves. ISIS’s propaganda machine will be ever more desperate to turn anything it can—from isolated stabbings to coordinated suicide bombings—into living proof that it continues to remain, expand, and incite. If we are not careful, this alone could stand to keep the group alive for years to come.