You are here: Home / Analysis / Why ISIS are using children in their execution videos

Last month, ISIS circulated a video in which a three-year-old stood in a ball pit, aimed a gun at a man chained to a fence and pulled the trigger, like reported by metro.co.uk 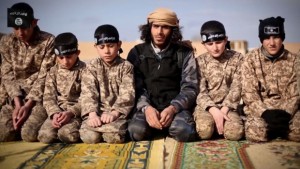 The abhorrent footage was the latest addition to a sickening trend that has seen the terror group use children to commit atrocities in the name of propaganda.

Of course, the so-called Islamic State has been circulating repulsive footage for years.

In 2014, Mohammed Emwazi first appeared as the masked killer Jihadi John when he beheaded journalist James Foley, while videos of executions are sadly common place.

But the use of a child that has barely learnt to walk to murder a man seems to mark a paradigm shit in the terror group’s approach.

Certainly, they are not afraid to use children to perpetuate their perverse message.

Recent reports talked of children being torn away from their families in Syria to be indoctrinated at training camps. ISIS even use the horrifically out of place term ‘cubs’ to refer to its child soldiers.

The Syrian Observatory of Human Rights (SOHR) estimated last October that more than 300 child fighters had been killed in the battle to free the city of Mosul in northern Iraq.

But while the use of children in terror videos is a new trend it is not necessarily indicative of a shift in ultimate emphasis for ISIS.

‘I think what you’re seeing isn’t so much a change in what they’re trying to achieve, it’s how they’re doing it and who covered that as well,’ Dr Evan Lawrence, an expert in terrorism and international relations at University of Central Lancashire, told metro.co.uk.

She explained that the terror group had learnt how to target an audience for its videos, which metro.co.uk does not publish.

‘We’ve got to a point now where so many spectacular events have occurred that you are starting to see a public disengagement,’ she said.

‘One of things ISIS has done spectacularly well is know their audience, know the social media and stuff they use and who it’s directed at.’

Dr Evan explained the use of the children to commit atrocities is a message that will resonate strongly with the west.

‘When we see children do violent acts and things like that it is more spectacular and it’s more egregious because it’s that defiling of innocence,’ she added.

‘The west tends to have this protectionist view of children, it is society’s job to protect the young and vulnerable. Clearly, these children will be in that category.’

She added: ‘In at least one of the videos, the child was a western citizen. It’s that kind of context, where we show a westernised young child taking on the persona of a kind of Islamic jihad and the implications of that.

‘That’s why you see things like Jihadi John as the voice of the videos. It’s a different way of using their resources to make the same point.

‘ISIS is still fairly new, we are talking about a three of four year period at most when people have been made aware of them but their message has stayed the same throughout.’

Asked whether the level of violence the children in these videos are subjected to was reflection of the experiences of children in Islamic State in general, Dr Evan said it would depend on the context.

‘You tend to look at children within ISIS in the same vein you would look at child soldiers’ she said. ‘They will be indoctrinated into violence and the way ISIS and the caliphate believe their world views to be.

‘Society is very regimented, you know what to do so you don’t get disappeared, you learn that early on as a child in those situations.’