You are here: Home / Analysis / Why is the US Military fighting in Niger? 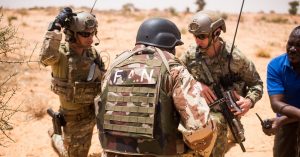 In October 2017, the Islamic State killed four US military officers and five Nigeriens soldiers in Niger; the ambush was widely reported by media agencies in the U.S. and around the world. It was one of the deadliest attacks on U.S. forces in Africa since the ‘Black Hawk Down’ battle in Mogadishu, Somalia, 24 years earlier, like reported by eurasiareview.com.

Following the incident, geopolitical analysts repeatedly raised one vital question: Why is the United States fighting in Niger and more broadly in Africa as a whole?

In 2002, only months after the 9/11 terror attacks, the Bush administration launched a little-known counterterrorism program called ‘The Pan Sahel Initiative.’ It was created to work with the militaries of African countries and assists their capacities to crackdown on terrorist groups in the region. The U.S. saw the vast deserts in these countries as areas where terrorist groups could thrive, potentially using them as base to launch attacks. Besides, in West Africa, poverty levels coupled with poor governance and failed states created perfect conditions for the mushrooming of several terrorist organizations.

Despite the presence of superpowers like the U.S. and even the France, terror groups began to flourish in the region, especially the al-Qaida affiliate known as the Islamic Maghreb, whose main goal was to install an Islamic caliphate and promote sharia law. Terrorist groups like this pose serious threats to regional powers and Western interests and, as a result, the U.S. once again strategically expanded its military footprint in the region. In 2007, Washington created a unified military command center for Africa, known as AFRICOM, which is responsible for all U.S. military involvement in 53 African countries on the continent. In this way, the presence of the United States has dramatically increased in Africa over the years.

A conflict in Mali broke out in 2012, when a Taureg rebel group captured the northern part of the country, then quickly lost control to an Islamist terror group. Several African countries and France sent military troops to Mali to fight with the rebel groups in the early phase of the conflict. But in 2013, the U.S. got involved when President Obama deployed 100 soldiers to neighboring Niger in a bid to suppress rebel groups and provide intelligence support.

This was only the beginning of a growing US-Niger partnership.

In 2016, the U.S. announced a plan to build a $100-million-dollar military base right in the middle of Niger to help combat radical groups and protect its border from insurgents. The U.S. military base in Agadez is headquarters to the drone and surveillance programs operating in Niger, Mali, Libya, and beyond. Today more than 800 U.S. troops are based in Niger and over 6,000 throughout the entire African continent.

“Are they really here to help our soldiers?” asks Boulama Hamadou Tcherno, a civil society leader in Niger. “Terrorism has increased since the arrival of U.S. soldiers; in fact, their presence on the ground does not make any changes” says Tcherno. In a similar note, Mariama Bayard, leader of the opposition asserts, “U.S. soldiers are creating a perfect condition for the Sahel to blow up.” On the contrary, Air Force Colonel Christopher Karns, an AFRICOM spokesman declares that “a safe, stable, secure and prosperous Africa is an enduring United States interest.”

Niger is one of the most militarized countries in Africa. The landlocked country is a part of five-nation anti-insurgency force also known as G5 Sahel, which includes Burkina Faso, Chad, Mali, and Mauritania. The G5 Sahel is backed by a 3,000-strong French military force. According to AFRICOM, there are currently approximately 1,200 US military personnel in all of West Africa, while the majority of them are in Niger. Despite such a presence of foreign forces in Niger, security analysts say the insurgency there is escalating at an alarming rate. According to the United Nations, terrorist attacks in parts of Mali, Niger, and Burkina Faso spiked in 2019 by five times the 2016 rate, leading to more than 4,000 deaths. For instance, in just one incident last year, more than 70 soldiers were killed in an ambush by suspected Islamist militants at a military post in western Niger.

Amidst this fragile situation, the Trump administration has recently begun to debate a potential reduction or withdrawal of US troops from West Africa. “The U.S. mission in West Africa is worthy”, said Emily Estelle, the Africa team lead for the Critical Threats Project at the American Enterprise Institute. “The threat in the Sahel have been growing even with this mission, but it will certainly worsen more rapidly if the mission ends,” foretells Estelle.

Many experts believe that it is exactly the wrong moment to pull U.S. troops out of Africa. In the words of French President Emmanuel Macron: “support from the U.S. to combat against the militants [would be] irreplaceable.”