You are here: Home / Analysis / Why is it easier for Islamists to claim asylum than persecuted Christians? 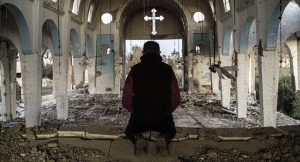 Mention persecution of Christians and most people rightly assume that this is a problem in countries such as Iran or Saudi Arabia or even Pakistan. While in this country, although we may not be able to actually stop Christians being persecuted in such places, the responsible government departments, courts and the UN are doing all they can to help its victims, like reported by christianconcern.com.

The Foreign and Commonwealth Office (FCO) has certainly been edging forward in the right direction. The review announced at Christmas 2018 by Jeremy Hunt into how the FCO can help persecuted Christians was a once in a generation event that has the potential if properly implemented to be a genuine gamechanger. At the beginning of February there was even a debate in both Houses of Parliament on persecution of Christians.

However, the review only dealt with the FCO and as a number of submissions to its consultation observed, there appeared to be a major problem at the Home Office, or more specifically that part of the Home Office dealing with asylum policy.

There is a significant and growing body of evidence that it is actually easier to claim asylum in the UK if you are an Islamist, than if you are a Christian facing if not imprisonment at the hands of the state, then certainly vigilante violence which is likely to cost you your life if you return to your home country.

Take the case of Reza Kharkhah, one of many thousands of Iranian Muslim young men who have travelled to Britain in recent years to try to claim asylum. Like many, he had dabbled in drugs. Yet, after arriving in the UK, he became a Christian together with his British girlfriend with whom he had a child. They came off drugs and turned their lives around. Given a new hope and purpose in life he regularly attends his local evangelical church where he has been baptised and seeks to share the gospel with other Iranian Muslims on social media.

Now across the Islamic world being baptised as a Christian is recognised as ‘apostasy’ – and abandoning Islam carries a mandatory death penalty for any sane adult male in the shar’ia of both Shi’a and Sunni Islam. Not only that – any criticism of Islam also potentially carries the death penalty for Islamic blasphemy. So, if he is sent back to Iran, if he’s lucky he’ll only be arrested and imprisoned. More likely, some zealous fanatic will try to kill him, either for apostasy or blasphemy or both. In fact, often such ‘honour killings’ are carried out by members of one’s own family. Yet, when his claim for asylum was turned down, the judge suggested, that there would be no risk to him if he were sent back to Iran.

Reza’s is far from being an isolated case. In fact, it is not even just Christian converts from Islam who face being turned down. Three years ago, the Archbishop of Mosul whose diocese was then still under the control of Islamic State was invited to the UK to attend the consecration of the UK’s first Syriac Orthodox cathedral at which Prince Charles was the guest of honour and personal messages were read out form the HM the Queen and Prime Minister, Theresa May. Also invited were the Archbishop of St Matthew’s diocese in Iraq’s Nineveh Plains and the Archbishop of Homs in Syria, part of whose dioceses IS and other jihadist groups had previously taken over.

Yet, all three archbishops were refused visas to visit the UK by the Home Office. When this story hit the headlines and concerns began to arrive in MPs’ mail bags, Home Office officials responded by claiming that the visa applications had all been properly assessed in line with the current policy i.e. they blamed it on government policy, rather than Home Office ineptitude!

In fact, it was far from being an isolated case, only months earlier Lambeth Palace had had to intervene with the Home Office after two bishops from Sudan had been refused visas for an exchange visit. Neither was an isolated incident.

However, the clearest evidence of the problem has been the tiny number of Christians resettled in the UK under the Syrian Vulnerable Person’s Resettlement Programme operated by the Home Office. According to the latest Freedom of Information responses the Home Office have supplied, of the 17,013 Syrian refugees resettled in the UK between January 2014 and the end of June last year a mere 100 were Christians – that’s 0.6 of 1%. Now, whilst no one knows exactly how many Christians there were in Syria before the current fighting started, most published estimates suggest Christians were between 5 and 10% of the population.

Not only that, Christians have been specifically targeted and churches deliberately destroyed. In February 2015 jihadists religiously cleansed an entire district of more than 30 Christian villages around the Khabour river in North East Syria, blowing up the churches after they had done so. IS even published a slave price list which only listed prices for Yazidi and Christian women. This has all happened in a region which has witnessed at least seven genocides of Christians in the past two centuries. In fact, the very word ‘genocide’ was coined as a result of reflection on the Armenian genocide.

Now those of us who have been aid workers know that when a group has been specifically targeted, they are normally overrepresented in refugee populations. So, when Home Office officials knew three or four years ago that Christians were being significantly underrepresented in the Syrian refugee scheme – they should have taken action. But they didn’t. Instead they denied there was a problem. However, there clearly is a problem – not least with the UNHCR to whom the Home Office outsourced the initial selection of refugees. However, their refusal to even admit the massive under representation of Christians was a problem highlights a broader problem within the culture of the Home Office.

But it is not just the Home Office that has a problem. There is a wider cultural problem within a whole swathe of the secular liberal establishment including government, academia and even at times the courts, which at best refuses to see Christians as a priority no matter how great their suffering. Yet other groups are treated somewhat more sympathetically, even members of organisations which have been implicated in the persecuted of Christians.

Take the Muslim Brotherhood for example. The current Home Office Guidance produced by its independent Advisory Group in 2017 effectively recommends that senior members of Egypt’s Muslim Brotherhood should be granted asylum in the UK because they are deemed likely to face persecution and denied a fair trial in Egypt. This is the Muslim Brotherhood which was the world’s first ever Islamist organisation, which in January 2015 called on its followers to engage in ‘jihad’ – something the Home Office guidance actually admits.

In fact, in 2015 just before the Home Office issued this guidance the government review of the Muslim Brotherhood by Sir John Jenkins concluded that the Muslim Brotherhood had always accepted the ‘political utility’ of violence, although on occasions it had found it pragmatic publicly to disavow it. The Jenkins review observed:

However, the Muslim Brotherhood at all levels have repeatedly defended Hamas attacks against Israel, including the use of suicide bombers and the killing of civilians.

It is also observed that

Senior Muslim Brotherhood figures and associates have justified attacks against coalition forces in Iraq and Afghanistan.

Since its ousting from power in 2013 the Muslim Brotherhood has also been implicated in large scale attacks on Egyptian Christians because they had opposed the Islamist constitution which the Muslim Brotherhood sought to impose while they were in power. Literally dozens and dozens of churches have been attacked and destroyed by large mobs of brotherhood supporters. Yet this is the organisation whose senior members should, according to the Home Office guidance, be presumed to be at risk of persecution and so receive asylum in the UK, while according to other Home Office guidance issued at the same time Egyptian Christians should not be.

The Muslim Brotherhood is not an isolated example. Four years ago Pakistan witnessed widespread pro blasphemy law demonstrations following the execution of Mumtaz Qadri for murder. Qadri, a police bodyguard had murdered liberal Muslim politician Salman Taseer because he had spoken up in support of Christian mother Asia Bibi, then facing a death sentence for alleged Islamic blasphemy. The demonstrations called for Qadri to be declared an Islamic martyr and national hero and the immediate execution of Asia Bibi before her Supreme Court appeal was heard. They directly inspired a radical Muslim in Bradford to drive to Glasgow and murder Asad Shah, an Ahmadiyya shopkeeper whom he accused of committing Islamic blasphemy on his Facebook page. Despite, this immediately afterwards two of the main leaders of Pakistan’s pro blasphemy demonstrations arrived in the UK having been granted visas by the Home Office for a preaching tour of mosques.

The contrast with people like the archbishops whose visas were refused and Reza Kharkhah whose asylum application was refused could hardly be greater.

Prime Minister Boris Johnson is reported to be keen to change the whole culture of Whitehall. The whole area of how Christians from countries where they face persecution are treated, might well be a good place to start.