You are here: Home / Analysis / Why is Islamic State regrouping in Libya? 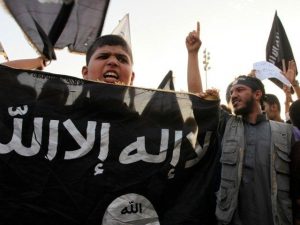 Continued political and military fragmentation in Libya is allowing for the regrouping of ISIS in the country after it was largely defeated in 2016, Walid Namane, an independent analyst, and North Africa expert has said, like reported by albawaba.com.

Two rival factions are competing for influence in the country: 1) the Tripoli-based government of National Accord (GNA) and 2) the Tobruk-based Libyan National Army (LNA).

Namane says that political agreement between the two rivals is the best way to prevent ISIS from reasserting itself in the country.
While officials declared absolute victory against the terrorist group after kicking them out of their stronghold in Sirte, there are signs that hundreds of ISIS militants are regrouping in nearby areas.

ISIS’ propaganda arm, the ‘Amaq News Agency’, released a clip in late August showing the militants setting up checkpoints and roadblocks on the highway heading south of Sirte.

A few days earlier, ISIS had attacked a military checkpoint manned by soldiers of the LNA, which is headed by General Khalifa Haftar, killing 11 people.

On Oct. 4, three ISIS militants launched a suicide attack against a courthouse in Misrata, killing two security guards, a prosecutor, and a fourth person.

The attack was seen as revenge for the role of militias from Misrata in driving ISIS out of Sirte.

Some 800 arrest warrants linked to the extremist group have been issued by Libyan authorities.

“Despite the fact that the group lost its stronghold in Sirte, it bounced back and has been able to step up its operations since August.

As long as Libya’s rival camps continue to struggle for power and control on the ground, ISIS will benefit from the weakness,” Namane warns.

“The absence of state institutions in some areas provides major opportunities for [ISIS] and other radical groups to benefit from smuggling activities and the well-organized criminal networks that emerged following the collapse of state authority in 2011.”

The re-emergence of ISIS clearly shows military means alone — even those that have the backing of the United States — cannot put an end to ISIS, he explained.

However, a sustainable settlement to the political and governance crisis in Libya at all levels could diminish chances of the group surviving.

As the militants have been driven out of their coastal strongholds, they have moved further inland into the Libyan desert.

This poses its own set of security problems for Libya’s neighbors, especially weak states such as Niger and Chad.

Namane said, “Libya’s south, with its wide, ungoverned territories, is a safe haven for all kinds of smuggling activities, and the main migration route from sub-Saharan Africa to northern Libya and on to Europe.

At the heart of this illicit economy is the Fezzan province in Libya’s southwest.

The geopolitical instability in the Sahel region was inflamed by the fall of the Muammar Gaddafi government in 2011 when there was a massive flow of weapons to the region.

Today, Libya’s south is used as a staging ground for extremists groups, such as the recently formed Jama’at Nasr Al Islam wal Muslimin, to launch attacks on Niger and Mali forces as well as French and American troops based in both countries.”

Concerns have also been raised about the ability of the militias under the ‘control’ of the GNA to counter the potential re-emergence of ISIS in Libya.

Though the pro-GNA Al Bunyan Al Marsous forces, a Misratan-dominated coalition of armed groups succeeded in expelling ISIS from its only North African “Wilaya” (province) in Sirte in December 2016, a number of these militias include some elements and groups who are seen as hardliners.

“In the past, some pro-GNA militias expressed sympathy for Al Qaida-linked groups such as Benghazi Defence Brigades and Benghazi Shura Council elements, who were cooperating with ISIS in Benghazi against the LNA,” Namane said.

Following the toppling of Gaddafi’s dictatorship in 2011, Libya has been rendered ungovernable by a slew of militias that are the real power on the ground.

This has led to the spread of militancy, smuggling, and human trafficking.