You are here: Home / MidEastGulf / Why is Daesh targeting the Gulf states? 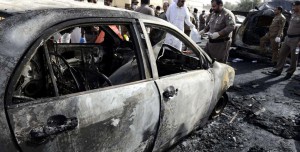 On Tuesday August 16, Daesh (the self-proclaimed IS) targeted the Qatif police station in the Eastern Province of Saudi Arabia killing a police guard. This attack is a continuation of Daesh’s operations in the Gulf where they have become increasingly active in targeting security forces and the Shiite community in an attempt to disrupt the national unity and security of the country. The local branches of Daesh have claimed responsibility for many of the attacks.

I believe that the intensification of attacks on Gulf states by this terrorist organization is aimed at achieving two goals.

First, the legitimization of savagery. Daesh fights in Syria and Iraq, but its ultimate target is Saudi Arabia. The Kingdom of Saudi Arabia has a highly symbolic significance for Muslims as it is the Qibla of all Muslims, the origin of Islam, the birthplace of the Message, the place of revelation. It is also the only authority in the world that has the religious legitimacy to overthrow Daesh and its savage ideology, which involves killing, judging people to be unbelievers and committing acts of unspeakable affront to humanity.

Daesh makes use of the weakness of official and non-official religious establishments that are unable to engage youth in religious discourse that meets the contemporary needs of young people, and which have also failed to subjectively, truly, rationally and logically refute Daesh’s dubious misconceptions. Daesh has made use of these factors to present itself as an alternative establishment to legitimize the obscurant ideas that it promotes. One of the main reasons for the proliferation of extremism and terrorist groups in recent years is the weakness of traditional religious establishments in the Arab world which has allowed these extremist groups to introduce their own alternative establishments.

Secondly, the financing of savagery. From the start, Daesh’s key strategy has always been “money before fighting”. Hence, when it first emerged in Iraq and Syria, it pushed hard to take control of Iraqi and Syrian oil resources. Oil is one of the principal means by which Daesh remains self-funded and capable of expanding its operations with no reliance on any external funding.

When Daesh took control of 60 percent of the oilfields in Syria, in addition to a number of oilfields in Iraq, profit from its export operations reached three million dollars a day. This terrorist organization has now been forced to follow other routes to finance its operations, i.e., laying its hands on Gulf oil, as its financial nerve has been targeted by the international coalition led by the United States and Arab countries including the Gulf states, in an attempt to bring an end to it by imposing financial strangulation.

A report published by Time Magazine titled “In the End, the Target for ISIS is Saudi Arabia” states that “in order for survival and prosperity, this organization is known for having no choice but to draw attention to the grand prize: Saudi oilfields”. Saudi Arabia, Kuwait, and the United Arab Emirates are in prominent positions among the top 10 oil producing companies in the world according to the Diplomatic Center for Strategic Studies. If Daesh can take control of these oil facilities, it will mark a shift in the strategy of the organization and its expansion capabilities.

Finally, terrorism represents a renewed worldwide threat that remains a serious concern to the entire international community. Therefore, all Gulf states, Arabs and even the international community must unite and cooperate to counter terrorism as it is a task that will have to be carried out collectively. It cannot be achieved by a single country.