You are here: Home / Analysis / Why Iran’s axis worried about Israel-Saudi ties? 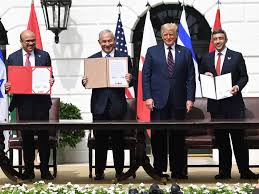 Iran is concerned about the next steps Israel and its new Gulf partners will take in the wake of the Abraham Accords signed in Washington on Tuesday, like reported by jpost.com.

Tehran’s displeasure is difficult to measure but the overall context and hints in pro-Iranian media give away the sense that the regime in Tehran and its allies and proxies in the Middle East view the potential Saudi-Israel relationship with concern.

Iran has been zig-zagging between hyperbolic condemnation of the UAE and Bahrain for working with Israel, to trying to ignore the setback that its threats have resulted in. Iran’s threats and its attempt to leverage the Iran Deal of 2015 to act with impunity throughout the region fueled the Israel-Gulf relationship.

Iran believed incorrectly that it had a blank check after the JCPOA signing to basically take over the Middle East. It sent drones and missiles in increasing numbers to Yemen in 2015, forcing Riyadh’s hand and brining Saudi Arabia and the UAE into Yemen’s civil war. Saudi Arabia didn’t want an Iranian-backed proxy on its doorstep.

Once Saudi Arabia was in Yemen the Iranians rapidly increased production of technical assistance for the Houthis. Soon ballistic missiles and drones were raining down on southern Saudi Arabia and even targeting Riyadh.

But Iran wasn’t satisfied even with this apparent accomplishment. It targeted the oil pump station at Al-Duadmi in Saudi Arabia in mid-May 2019 using drones allegedly sent to Kataib Hezbollah in Iraq.

Then Iran ordered the Houthis to strike at Shaybah oil field near the UAE border. The attack was a message and it was sent in August 2019.

In September 2019, Iran went one step further using 25 drones and cruise missiles to attack Saudi Arabia’s Abqaiq facility. Iran, for some reason, has believed that the more it attacks Saudi Arabia the more it will pressure Riyadh, but then is surprised that Saudi Arabia and its Gulf allies would become more willing to look to potential talks with Israel.

Similarly Iran began to increase its role in Syria after the Iran deal. This included construction of facilities and support for missile factories in Syria. By the fall of 2017 Iran had agents at Masyaf and other sites, such as Kiswa south of Damascus.

Those sites were targeted by airstrikes in 2018 and 2019. Iran began to pour resources into T-4 base and also the Albukamal border crossing area in 2018.
Airstrikes hit Kataib Hezbollah, an Iranian proxy, in Syria’s Albukamal in June 2018. By 2019 Iran had built a whole base called Imam Ali near Albukamal. In April 2018 Iran even tried to unload a 3rd Khordad air defense system at T-4, according to a Ynet report.

These Iranian projects, trafficking weapons to Hezbollah and building up a footprint in Syria to threaten Israel, while threatening Saudi Arabia from Yemen have been Tehran’s main strategies. Iran also funds Hamas and Hezbollah and Palestinian Islamic Jihad. Riyadh is concerned about Iran’s role in Lebanon, summoning Lebanon Sunni leader Saad Hariri for consultations in 2017.

Now pro-Iranian media, such as Al-Mayadeen, is reporting about potential Saudi-Israel relations. “In the time of normalization there is no place for neutrality, with or against Palestine,” shouts a headline at Al-Mayadeen on September 16. “The day is recorded for those who would compromise,” say the Houthis, according to Fars News reports.

The headlines are the same basically. The Houthis, Hezbollah, Iran, Kataib Hezbollah and all the proxies and pieces and tentacles of the Tehran octopus across the region are being told to repeat the same mantra.

That is why Kataib Hezbollah is mobilizing a protest in Basra, not far from Kuwait and the Saudi border, to show off its strength, according to reports. Basra was the center off Iraq protests for a year demanding more employment and investment. Now the only investment they get is anti-Israel and anti-Saudi propaganda.
Iran’s Tasnim news also reports that, while Saudi Arabia supports the Palestinians, that it could work with Israel in the future. This leaves little doubt that after five years of Iranian attacks and threats and pressure against Israel and Saudi Arabia, that Iran’s main concern is the next moves in Riyadh.

Iran’s Press TV on September 16 says that Saudi Arabia is part of the “plots against Muslims,” and highlights Saudi air raids on Yemen as well as alleged Saudi nuclear facilities and a Saudi challenge to Qatar.

You don’t put five headlines against Saudi Arabia on your site the day after the UAE-Bahrain deal unless that is your main concern.

While Iran wants to downplay the UAE-Bahrain deal in its media, and highlight Saudi Arabia, it quietly knows that it has suffered a setback. Five years of trying to dominate Syria, Lebanon, Iraq and Yemen have encouraged Israel and the Gulf to work more closely and brought the Trump administration’s transactional deal-making foreign policy a string of successes.

Even though Iran has operationalized its lobby in the West to talk about how Iran is “surrounded,” Tehran knows that its aggression has had blowback and potentially backfired. It must now weigh the next step.

Last year it used drone strikes and pushed rocket attacks on US forces in Iraq as well as mining ships in the Gulf of Oman. It still has an expanding drone and missile arm and clandestine networks to move its weapons all across the region.