You are here: Home / Analysis / Why Iran uses Fakhrizadeh’s killing to ratchet up nuclear ambitions 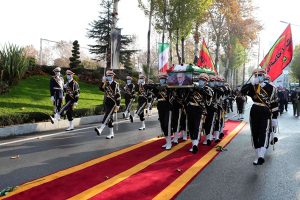 Debate raged in Iran on Sunday over how and when to respond to a top nuclear scientist’s assassination blamed on arch-foe Israel, like reported by thearabweekly.com.

Two days after Mohsen Fakhrizadeh died from wounds sustained in a firefight between his guards and unidentified gunmen near Tehran, parliament demanded a halt to international inspections of Iranian nuclear sites while a top official hinted Iran should leave the global non-proliferation treaty.

President Hassan Rohani has stressed the country will seek its revenge in “due time” and not be rushed into a “trap.”

Iran’s English-language Press TV said on Monday that the weapon used in the killing of a prominent Iranian nuclear scientist last week was made in Israel.

“The weapon collected from the site of the terrorist act (where Mohsen Fakhrizadeh was assassinated) bears the logo and specifications of the Israeli military industry,” an unnamed source told Press TV.

But speaking before the Press TV report, Israeli Intelligence Minister Eli Cohen told radio station 103 FM on Monday that he did not know who was responsible.

Israel says Fakhrizadeh was the head of an Iranian military nuclear programme, the existence of which the Islamic republic has consistently denied, and Washington had sanctioned him in 2008 for activities linked to Iran’s atomic activities.

Israeli experts saw the hand of Israeli intelligence in the operation. But if Mossad was responsible, experts were zeroing in on the significance of the timing.

Did Israel simply see a chance to carry out an operation long in the planning, or was there a direct link to US President Donald Trump’s imminent departure from the White House?

For Israel’s left-leaning Haaretz newspaper, the Trump link was clear.

“The timing of the assassination, even if it was determined by purely operational considerations, is a clear message to President-elect Joe Biden, intended to show Israel’s criticism of the intent to return to the nuclear accord with Iran,” it said.

Trump withdrew the US from a multilateral nuclear agreement with Iran in 2018 and then reimposed and beefed up punishing sanctions as part of its “maximum pressure” campaign against Tehran.

Biden has signalled his administration may be prepared to rejoin the accord, but the nuclear scientist’s assassination has revived opposition to the deal among Iranian conservatives.

Those responsible for the killing “had a short period of time to take action to weaken the Iranian nuclear program and to convince Biden that once he becomes president he should not return to the (nuclear) agreement,” he said.

Israeli journalist Ronen Bergman, author of a 2018 book documenting Israel’s covert assassination of its enemies over the years, said Sunday that such an attack, deep in enemy territory, “has to be planned for many months, if not for years.”

“It cannot be carried out merely by pressing a button,” he added, writing in top-selling Israeli daily Yediot Aharonot.

Bergman’s piece highlighted Netanyahu’s 2018 television appearance to announce that Israeli agents had penetrated a “secret atomic archive” in Tehran and removed tens of thousands of files proving its arms plans.

Netanyahu said that Fakhrizadeh played a central role in those plans, adding “remember this name.”

The scientist’s body was taken for a ceremony on Sunday at a major shrine in the holy city of Qom before being transported to the shrine of the Islamic republic’s founder Imam Khomeini, according to Iranian media.

On Monday, live video from Tehran, shared by national outlet Iran Press, showed uniformed men gathering around images of Fakhrizadeh seemingly ahead of a procession.

His funeral will be held in the presence of senior military commanders and his family, the defence ministry said on its website, without specifying where.

The head of Iran’s Expediency Council, a key advisory and arbitration body, said there was “no reason why (Iran) should not reconsider the Nuclear Proliferation Treaty.”

Parliament speaker Mohammad Bagher Ghalibaf called Sunday for “a strong reaction” that would “deter and take revenge” on those behind the killing of Fakhrizadeh, who was aged 59 according to Iranian media.

Iran’s ultra-conservative Kayhan daily called for strikes on Israel if it were “proven” to be behind the assassination.

Kayhan called for the port city of Haifa to be targeted “in a way that would annihilate its infrastructure and leave a heavy human toll.”

Iran has responded to the US withdrawal from the 2015 nuclear deal by gradually abandoning most of its key nuclear commitments under the agreement.

In the rhetorical storm about reactions to the killing, Iranians leaders seemed to shift towards using the nuclear card instead of undertaking a retaliatory act that could risk sparking the wrath of Trump during his last weeks in office. They also know that striking at Israel or Israeli interests will trigger a no-holds-barred reaction from Israeli Prime Minister Binyamin Netanyahu.

Rezai called on Iran’s atomic agency to take “minimum measures” such as “stopping the online broadcast of cameras, reducing or suspending inspectors and implementing restrictions in their access” to sites, ISNA news agency reported.

Iran’s parliament said the “best response” to the assassination would be to “revive Iran’s glorious nuclear industry.”

It called for International Atomic Energy Agency (IAEA) inspectors to be barred from the country’s atomic sites, said the legislature’s news agency ICANA.

But the spokesman for Iran’s atomic energy organisation, Behrouz Kamalvandi, told IRNA on Saturday that the issue of inspectors’ access “must be decided on at high levels” of the Islamic republic’s leadership.

Iran will give a “calculated and decisive” response to the killing of its top nuclear scientist, said a top adviser to Iran’s supreme leader.

“Undoubtedly, Iran will give a calculated and decisive answer to the criminals who took Martyr Mohsen Fakhrizadeh from the Iranian nation,” Kamal Kharrazi, who is also head of Iran’s Strategic Council on Foreign Relations, said in a statement.