You are here: Home / Analysis / Why Hezbollah is the world’s most dangerous terrorists 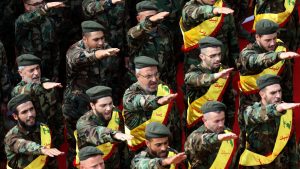 Hezbollah is the most successful terror group in history. The Lebanese Shia militia may not have conquered as much territory as ISIS nor attracted so many recruits, but since its founding in 1985 it has fought Israel for almost 40 years, and it has fought it well. In May 2000, Hezbollah expelled the IDF from the “security zone” it had occupied in South Lebanon for nearly two decades; in 2006 Hezbollah then fought it to a military stalemate. In doing so, the “Party of God” did more than just inflict casualities on its long-standing enemy. Since Israel’s crushing defeat of the combined Arab armies in the 1967 Six Day War, no one thought an Arab force could do more than just terrorise or harass the Israelis. Hezbollah proved them wrong, like reported by unherd.com.

When it comes to Israel, the Arab world can be divided — loosely — into blocks. There’s the so-called “Axis of Accommodation”: states like Egypt and Jordan that have made peace with the Jewish state, accept (officially at least) its existence and seek to avoid future conflict. Set against them is the “Axis of Resistance” — countries that believe all compromise to be a betrayal of principle, centred on Iran and Syria.

It is important to understand that these are more than just opposing stances to Israel — they are alternative modes of Middle East statecraft. As Thanassis Cambanis observes in his rigorous book, A Privilege to Die, Hezbollah has “convinced legions of common men and women that Israel can be defeated and destroyed — and not just in the distant future, but soon.” Its leader Hassan Nasrallah now regularly “reminds his millions of listeners across the Arab world that Hezbollah and its allies — the ‘Axis of Resistance’ — have wrung more concessions from Israel by force than the pro-Western ‘Axis of Accommodation’ has won through decades of negotiation.”

But the Middle East is riddled with militia groups allied against the West and, specifically, Israel — not least Hamas, which recently fired hundreds of rockets from Gaza into the country. The Iranian-controlled Shia militia organisation, the Popular Mobilisation Front (PMF), has spent years attacking Western targets in Iraq; in Yemen, the Houthis have battered the Saudi Army. But Hezbollah towers above them all, both in its military efficacy and political strength. Why? The answer lies with Ali Akbar Mohtashamipur, the Iranian cleric who died aged 74 last week from Covid-19.

Few know more about Hezbollah — and Mohtashamipur — than Shimon Shapira, a retired Brigadier General in the Israel Defense Forces (IDF), former ‎military secretary to ex-Israeli Prime Minister Benjamin ‎Netanyahu, and now a fellow at the Jerusalem Center for Public Affairs. “Mohtashamipur was the architect of Hezbollah,” he tells me. “And Hezbollah changed everything.”

“Mohtashamipur was a real revolutionary, and a close associate of the founder of the Islamic Republic [Ayatollah Ruhollah] Khomeini himself,” he continues. “It was Khomeini who personally sent Mohtashamipur to Damascus to create a new Shiite radical movement to rival Amal, the Lebanese Shia movement founded in 1976. Amal is secular, and the Mullahs knew it would never be what they wanted: an Iranian arm in Lebanon.”

What the Iranians needed was a new movement, one adhering to the doctrine of the Khomeini’s velayat-e faqih, (rule of the jurist), which holds that those best equipped to rule are those best equipped to interpret God’s law — namely clerics. It needed an organisation led by Ulama, Muslim clerics. From Syria, Mohtashamipur went across the border into the city of Baalbek in Lebanon’s Baqaa Valley. There he met with three clerics, Abbas al-Moussawi, Subhi al-Tufayli and Mouhammad Yazbek, all men steeped in the ideology of the velayat-e faqih; all men who would happily take orders from Khomeini, and therefore, Iran. Together they founded Hezbollah, or “The Party of God”. Al-Moussawi would be its leader until Israel assassinated him in 1992.

“And I’ll let you in on a secret,” Shapira adds: “This was in summer 1981 — before Israel even entered Lebanon.” Received wisdom has it that the Lebanese Shia became radicalised after Israeli forces moved into Lebanon in 1982 and began occupying the country. In truth, the seeds were sown before.

If step one for Tehran was to set up an organisation ideologically devoted to it, step two was to provide its proxy the military heft needed to become a player. Tehran dispatched soldiers from its Islamic Revolutionary Guard Corps (IRGC) to Lebanon, where they set up training camps in Baalbek and the surrounding areas. Suddenly, the Israelis were facing Iranian-trained Shia fighters in Lebanon. Things got tough. They were no longer facing just a militia group but the direct instrument of a state.

“That’s the real strength of Hezbollah,” Shapira concludes, “and it’s the key to understanding their success. Hezbollah is essentially an Iranian brigade in Lebanon.”

Iran spent money and time and human resources to turn Hezbollah into a militia of unrivalled ability in the Arab world, but that is only half the story. Hezbollah is an army, but it is also a political party, and it is now the de facto ruler of Lebanon. The last time I was in the country I took a trip to South Beirut, the group’s stronghold in the capital, and here the truth of that fact is everywhere.

To understand the Party of God you need to see the banners of Nasrallah and Khomeini and Iranian Supreme Leader Ali Khamenei dangling from lampposts and roundabouts. You need to see the yellow flags flutter in the wind, the veiled women scurry down narrow roads in tight, black phalanxes, and see the watchful, bearded men on the balconies who follow your every move.

Lebanon is a multi-ethnic state with a confessional system that allocates government office via ethnicity, religion and sect. Christians, Druze and Sunni parties and militias all jostle for power in a state smaller than Yorkshire. But only one group is almost pathologically well-organised; only one group hogs the best guns. Hezbollah runs things, and it runs them well because the Islamic Republic is a revolutionary state and it taught its Lebanese allies the tools of politics just as much as war.

Jonathan Spyer is an Israeli journalist and Middle East analyst who was in the IDF during the 2006 war and has long studied Hezbollah. “Iran has developed a methodology of irregular and political warfare that is effective beyond anything comparable in the region,” he says. “Israel is far more skilful than Iran in most of its military capabilities. But in terms of creating training and indoctrinating proxies, and then using that military muscle to build political movements, they are unparalleled.”

It’s not enough to train people to shoot accurately. You also need to give them a reason to hold a gun in the first place. And the best way to do this is not just with an ideology — though that sits front and centre — but to construct an apparatus around it. Hezbollah builds schools and creates youth outreach programmes; it funds building works and the training of doctors and engineers; it cares for the sick and the elderly. After the destruction of the 2006 Lebanon War, when the Israelis flattened swathes of Lebanese infrastructure, Hezbollah began distributing large amounts of cash to anyone who could prove their home had been damaged. Known as the “Green Flood” (Al-sayl al-akhdhar), the dollars reportedly came into Beirut from Iran via Syria.

And the young Lebanese Shia who do join Hezbollah to fight get not only top-class training and the respect that comes with carrying a gun, but a reason to do so, beyond the cult of martyrdom endemic across the Middle East. 30 December 1999 was the last time Hezbollah launched a suicide bomber when a fighter drove a car bomb into an Israeli military convoy; unlike al-Qaeda and ISIS, and (very often) Hamas in Gaza, Hezbollah is interested in people who can do more than just die.

Right now, the Party of God sits on Israel’s northern border. The extensive combat experience Hezbollah gained fighting an ultimately successful 15-year insurgency against Israel in Sothern Lebanon is now complemented by almost a decade of fighting in Syria. Its soldiers are battle-hardened to a degree that Israel’s other border enemy Hamas simply cannot match.

Seeded within its territory are an estimated 150,000 missiles (many Iranian-made), and this is where Hezbollah’s threat becomes regional — indeed possibly global. Through them, Iran can now strike deep into Israeli territory, with a force that would be beyond the ability of Israel’s anti-missile system Iron Dome. Hezbollah has become Iran’s primary means by which it can deter and respond to Israel in the case of war.

But that’s not all. As a proxy force Hezbollah gives Iran not just an expanded forward footprint but something almost as valuable: deniability. The Iranians are now beginning to seed its Zulfiqar missiles in Western Iraq among their PMF Shia militia clients — giving them another position from which to fire into Israel.

Israelis are in no doubt that it is Hezbollah in Southern Lebanon, acting to all intent and purposes as a forward Iranian base, that now poses the greatest threat to national security. They are on its border and are arguably the toughest foe Israel has ever faced. Mohtashamipur might be dead, but Spyer still remembers 2006, “Hezbollah reminds me of what people said about the German Army at the end of World War II: you cannot afford to take chances with them: they will punish any lack of professionalism. You have to be at the very top of your game, or you will pay.”