You are here: Home / Analysis / Why France is the new Syria 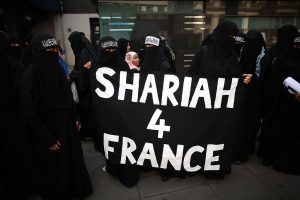 While French President Emmanuel Macron is working on the law against “Islamist separatism,” Islamists are threatening to separate many heads from the bodies of numerous mayors and professors, like reported by inn.com.

Writings threatening to behead Jérémie Bréaud, the Macronian mayor of Bron (Rhône), have appeared in various places in Lyon, leading Interior Minister Gérald Darmanin to place the first citizen under protection. “Jérémie Bréaud, we will behead you, son of Satan”. And again: “We will behead teachers and students.”

“I am not afraid and I will not give up,” responded Bréaud.

Threats identical to these were aimed at the mayor of the eighth arrondissement of Lyon, Olivier Berzane, on the walls of a school. The Association of Mayors talks about hundreds of threats that have arrived in recent days. According to France Info, two hundred investigations into death threats have been opened in relation to the beheading of Professor Samuel Paty in Conflans-Sainte-Honorine.

“There are many threats that target public figures and teachers,” says a judicial source to Le Parisien. In Essonne, a mayor was threatened with death after he paid tribute to Paty. This is Stéphane Raffalli, the first socialist citizen of Ris-Orangis. “O hateful Frenchman, you insult the Prophet Mohammed, we will tear your neck off.”

“Similar events against elected officials have been observed in Île-de-France,” Le Parisien said. That the climate was incandescent was understood during the homage to Paty in the schools, where “four hundred violations of the minute of silence” were reported, as the Minister of Education, Jean-Michel Blanquer, has just revealed. Students who whistled during the moment of recollection, others who laughed, others who spread the photo of Paty beheaded.

In a high school in Caluire-et-Cuire, near Lyon, a student threatened a teacher to “cut off his head.”. In Gisors (Eure), a girl distributed a photo of Paty kneeling to her companions. They range from 160 cases of refusal to participate in the minute’s silence to interruptions and, even worse, 150 cases of condoning Islamic terrorism.

The phenomenon is so widespread that in Albertville, Savoy, the police had to summon four ten-year-old children and their parents to the police station because in the classroom, in words addressed to the teachers, they said that “that teacher deserved to die.”

Even the mayor of Le Touquet, Daniel Fasquelle, was the subject of death threats after a post on Paty, as Mohamed Boudjellaba, mayor of Givors: “Macron we are going to cut your head off with that bastard of Boudjellaba.”

An engineer has just been arrested for threatening Laurent, the professor of History and Geography in the Grenoble area and who appears on the reality TV show “Koh-Lanta” with beheading, saying “I will behead you.” Laurent was preparing a video tribute to Paty. “Do you know what we do to teachers?” wrote the Islamist.

Another teacher of History and Geography from the Jacques Prévert middle school in Noisy-le-Grand was threatened. In Reims, a policeman heard a driver saying: “I’ll cut your head off like Paty”.

Béchir Ben Hassen, an imam banned from preaching in Tunisia, appeared on video on social media, recalling that the four legal schools of Islam validate beheading for anyone “offending the Prophet”. The teachers are notified and with them the mayors who support them. In an interview with Le Soir, the French Minister of Education Jean-Michel Blanquer said that professors who feel threatened can ask for protection.

“My father will behead you.” a student told his teacher at the Pierre Mendes France school in Saumur. He did it in class, in front of everyone. Like ISIS did to Raqqa’s teachers. The soundtrack of this widespread Islamization nightmare was broadcast yesterday by a rapper from Paris who calls himself “Maka”. The piece is titled “S ***** P ***”, the initials of the decapitated professor. “Let’s cut Samuel Paty, without empathy.”

In his hand, a machete. The one that is dividing France in two.