You are here: Home / Analysis / Why Erdogan is not serious about eliminating Hayat Tahrir al-Sham, the official al-Qaeda-affiliate in Syria 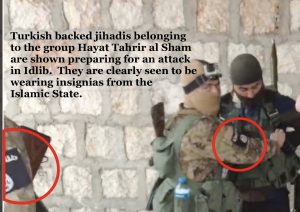 In their high-profile summit on the Black Sea resort of Sochi back in 2018, Russian President Vladimir Putin and Turkish President Recep Tayyip Erdogan agreed — among other things — to task Turkey with cleansing the northwestern Syrian province of Idlib from all terrorist groups. This, of course, was in reference to Hayat Tahrir al-Sham (HTS) — formerly known as Jabhat al-Nusra — the official al-Qaeda-affiliate in Syria, like reported by eeradicalization.com.

HTS was the only formidable opposition force still standing in Idlib, after ISIS strongholds had been dismantled in the province and throughout the rest of the country. Unlike ISIS, however, HTS was composed almost exclusively of Syrian fighters who were fighting in their own towns and villages, which made their eradication extremely difficult.

Erdogan accepted the task and, in exchange, was given a series of assurances that he could keep his safe zone on the Syrian-Turkish border and that none of his checkpoints in Idlib would be targeted. He was given a deadline of October 15, 2018 to defeat HTS, which he missed, along with every subsequent extension. Finally in March of this year, he met again with Putin to discuss Syria and was tasked with the exact same mission, yet, this time, with no deadline.

Arab states like Egypt, the UAE and Saudi Arabia were not happy about the arrangement and cried foul play, arguing that it was Erdogan who supported the rise of jihadist groups in northern Syria in the first place. They did not trust Erdogan to actually turn against the very same militias that he had founded and backed since 2012. In fact, Erdogan shipped off some of these mercenaries to Libya in late 2019 to fight against forces supporting Prime Minister of the Government of National Accord, Fayez al-Sarraj, who the UAE and Saudi Arabia believe to be an ally of the Muslim Brotherhood.

Turkey had originally tried to negotiate a safe exit for HTS from Idlib without engaging in an actual armed confrontation. In October 2017, HTS militias escorted a Turkish reconnaissance unit into Idlib, where three meetings took place between the jihadist group and Turkish officials. The Turks tried — with little luck — to convince HTS to exit Idlib, the northwestern province that stretches from the village of Atmeh (north of Idlib, east of the Turkish border) to Darat Izzat (northwest of Aleppo), all the way to the Aleppo-Gaziantep Highway. When that failed, Ankara adopted a new approach: encouraging defections within HTS, sowing seeds of discord within its ranks and nudging fighters to defect and join other jihadist groups. Syrian ex­pert Charles Lister said the end objective was to create a “man­ageable competitor (out of HTS) rather than an adversary.”

In reality, Ankara wanted somebody else to do its dirty work. Should the mission succeed, Erdogan would swoop in to claim credit; should it fail, he would blame someone else. He also did not want to run the risk of a bloodbath where he would lose soldiers of the National Liberation Army or the Free Syrian Army. He needed these bodies in future operations against Syrian Kurds. Over the course of the Syrian conflict, HTS had been the most capable adversary to the Syrian armed opposition, giving Erdogan all the more reason to avoid sending his proxies into a suicidal battle against them.

Finding recruits was always relatively easy for Jabhat al-Nusra leader Abu Mohammad al-Golani. Young men came knocking on his door, wanting to join al-Nusra first, and then HTS. In fact, many begged to join. The media attention the West was giving al-Golani was the greatest advertisement he could ever hope for — and it was free.

People came to HTS for different reasons and Erdogan picked up on this phenomenon early into the Syrian war. Some saw real promise in its jihadist program, while others wanted arms to protect their homes and neighborhoods. Many simply needed the protection of a local militia, since all manifestations of statehood had collapsed throughout northern Syria. With no police and no official army, people had to run their own affairs and protect their own lives and belongings. People needed arms and HTS had plenty to distribute.

Its army was organized along semi-conventional military lines and given great autonomy on the battlefield. Platoon commanders were allowed to take on-the-spot decisions without awaiting instructions from higher command. They had the liberty of firing at will, invading villages, taking captives and shooting anybody they perceived as an enemy.

The Emergence of Hurras al-Din

Turkey’s divisive tactics began to bear fruit with the formation of Hurras al-Din in February 2018 — a coalition of jihadist groups who defected from HTS after its public distancing from al-Qaeda in July 2016. They quickly became a formidable player in Idlib, briefly challenging HTS within its own fiefdom. The fact that they were tearing Idlib apart and causing civilians to flee in large numbers did not phase Erdogan. What mattered to him was that the HTS-Hurras al-Din divide continued to empower him at the negotiating table — making his proxies stand out as moderates, while giving the Russians all the more reason to maintain Turkish military presence in the area.

In June, HTS — in direct coordination with Turkey — carried out a series of impressive operations aimed at rebranding itself as an ally in the war on terror. For starters, HTS members arrested Saraj al-Din Mukhtarov (aka Abu Salah al-Uzbaki) — a top jihadist wanted by Interpol. Mukhtarov is, reportedly, to be transferred into Turkish custody where Ankara plans to use him as a bargaining chip in future talks with the US and EU.

HTS militants also killed Khaled al-Arouri (aka Abu Qassim al-Urduni)— a ranking jihadist commander of Hurras al-Din, but, more importantly, it arrested the notorious terrorist Jamail Zeinah (aka Abu Malek al-Talli) — a close friend and comrade of al-Golani who had defected from HTS in April. Al-Talli hails from the Qalamoon area in Syria and is a former founder of Jabhat al-Nusra. He is the man who kidnapped the nuns of Maaloula and Lebanese soldiers in Arsal back in 2014. In June, he had single-handedly orchestrated a merger of five jihadist groups who were opposed to Turkish-Russian agreements in Idlib, creating a group called “Fa Ithbato” (Hold Your Positions). The five groups under his command are Tansikiyat al-Jihad (Jihadi Coordination Committee), Liwa al-Muqatileen al-Ansar (all foreigners), Ansar al-Din (headed by Abu Abdullah al-Shami), Hurras al-Din and Ansar al-Islam. HTS declared all of them outlaws, saying no military group could be established in the Syrian north without its permission. By mid-July, most of their bases had been stormed by HTS and their top commanders were either killed or arrested.

An Effort to Normalize HTS

Erdogan will use these victories against Hurras al-Din to show the world — and the Russians — that he is moving ahead with the tasked job of cleansing Idlib from hardliners and radical jihadists. In exchange for that, he will demand greater concessions vis-à-vis obtaining permanent status for his troops and more joint action against the Kurds of Syria. He has already received the green light to increase the number of Turkish checkpoints in Syria from 12 to 47 — three of which are deep within Russia’s fiefdom in the countryside of Hama and Latakia. He hopes that this “success” might eventually lead to removal of HTS from everyone’s blacklist — except perhaps the Syrian government.

While the Syrian government continues to designate HTS as a terrorist group — no different from al-Qaeda or ISIS— the Russians are more cautious, realizing that they are too difficult to eradicate because they know the terrain inside and out and are deeply embedded within their communities. Moscow prefers a negotiated settlement with HTS commanders, which leads to the surrender of their arms and agreeing to reconciliation terms spelled out by their base in Hmeimeem on the Syrian coast.

“It seems like Turkey is trying to present HTS as a group capable of— at least for now — eradicating radical groups like Hurras al-Din,” said Ibrahim Hamidi, a Syrian journalist from Idlib who is a senior editor at the London-based Asharq Alawsat. Speaking to EER, he explained: “HTS wants to be the single player in Idlib, and, it is noteworthy that in the last Putin-Erdogan summit, there was no condemnation of HTS like what happened during their summit in September 2019.” HTS is an “important card in the hands of the Turks,” he added, “which it will not surrender for free”.

Despite Erdogan’s efforts to stack the cards in his favor, he has very little to show for himself. “Turkey achieved the opposite of what it aimed for,” said Nikolaos van Dam — a celebrated Syria expert and former Dutch ambassador to the Middle East. Speaking to EER, he explained: “It wanted to topple the regime in Damascus, but failed to do so. It allowed billions of dollars in arms shipments across its borders into Syria, parts of which ended up in the hands of radical Islamist groups. It wanted to neutralize the Kurdish PYD/YPG linked to the PKK, but the PYD/YPG became stronger than ever.” It decided to stay away from any direct confrontation in Idlib, allowing these groups to “weaken themselves and their rivals by fighting amongst each other.” He added: “The Syrian regime would not mind if the Turks would eliminate these groups for them, but will, one day, march against those who are backed by Turkey, in an effort to recover all Syrian territory, including parts occupied by Turkey itself.”