You are here: Home / Senza categoria / Why does Islamic State hate being called ‘Daesh’? 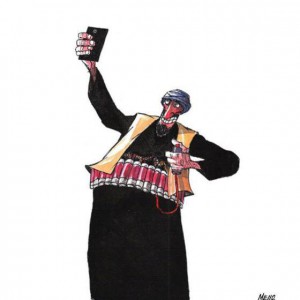 Since the rise of the so-called ‘Islamic State’ to notoriety early last year, the group has become known by many terms, including IS, ISIS and ISIL.
A new term to have emerged recently, however, is ‘Daesh’.
French President Francois Hollande used it after the large-scale terror attacks in Paris, which were claimed by the group.
He said the attacks were “waged by a terrorist army, a jihadist army, by Daesh, against France.”
US Secretary of State John Kerry has also used the term to describe Islamic State, whilst hacker group Anonymous used it while promising to ‘wage war’ on the extremists.
IS, meanwhile, has threatened to ‘cut out the tongues’ of anyone it hears using the term, according to American outlet NBC News.
But what does it mean – and why do Islamic State hate it so much?
‘Daesh’ is an acronym for the Arabic phrase al-Dawla al-Islamiya al-Iraq al-Sham – ‘Islamic State of Iraq and the Levant’.
IS hate it because it’s similar to two Arabic words: ‘Daes’, which translates to ‘one who crushes something underfoot’, and ‘Dahes’, meaning ‘one who sows discord’.
Early this year Tony Abbott, then Prime Minister of Australia, announced that he would begin referring to Islamic State as such, saying:

“Daesh hates being referred to by this term, and what they don’t like has an instinctive appeal to me.”

But others have warned against using the term to describe the terror group.
National security analyst Evan Kohlmann told NBC:

“It’s a derogatory term and not something people should use even if you dislike them. It would be like referring to Germans as ‘Huns’.”