You are here: Home / Senza categoria / Why did the French intelligence director and his US counterpart said about the division of Iraq and Syria ? 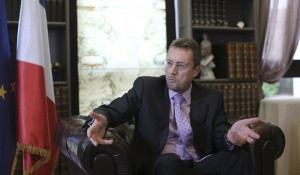 French intelligence director, Bernard Bajolet announced that the states of Iraq and Syria will never regain its former borders.

Bajolet said at a conference on intelligence issues , organized by George Washington University in the US federal capital, that “the Middle East as we know is over and I doubt that it return back again.”

He stressed that “the same applies to Iraq,” he said “I do not think that there is a possibility to return to the previous situation.”

Bajolet expressed that he is “confident” that the region will stabilize again in the future, but did not specify how it will be achieved, however, he expressed his belief that it will be different from those drawn after World War II.

In turn, the US intelligence director “CIA” John Brennan expressed a close point of view to his French counterpart.

Brennan said, “When I look at the destruction in Syria, Libya, Iraq and Yemen , it is difficult to imagine the existence of a central government in these countries able to exercise control or authority over this border drawn after World War II.”

On the other hand the US official said that “a military solution is impossible in any of these countries.”

He considered that it is wrong to go directly towards the search for “final settlement” At the moment, pointing to the need to adopt small steps strategy through seeking to “lower the temperature, reducing the intensity of the conflict, build some trust among the parties who are there and who wish to actually reach a peaceful settlement”.